There’s no question that in the very limited subgenre of Ivan Reitman comedies where Arnold Schwarzenegger is teamed with Danny DeVito in a mismatched comedy duo, Twins is the crown jewel. Where does that leave its only competition, though? Much like how Twins finds it endlessly hilarious that Schwarzenegger is large & DeVito is small, the follow-up to that pairing, Junior, is tickled by the idea of the smaller actor getting the larger one pregnant. That’s not an idea that necessarily generates brilliant comedy on a joke to joke basis, but it does lead to very pressing questions like How?, Why?, and Wait What? that could never be fully answered by a single motion picture. Reitman & company were so amused by the idea of a pregnant Arnold Schwarzenegger that they never stopped to consider the reasoning or the implications behind the unholy creation, leading to an oddly tame studio comedy with an absurdly bizarre basic premise that’s made all the more jarring by the fact that it’s not fully explored. Twins is the funnier, more successful Schwarzenegger/DeVito comedy in Reitman’s catalog, but Junior is clearly the strangest.

Schwarzenegger begins Junior as a caricature of a meat-head supernerd near-identical to the one he played in Twins. The only difference is that this nerd is uptight, a cynical academic who’s nervous around the children & social obligations he encounters through his career in fertility research. As his foil, DeVito is also similar to the chauvanistic snake oil salesman he plays in Twins, except this time he works in the field of gynecology. In the name of saving their collaborative research project from having its university funding pulled (or some other such contrivance), the two goofs make the rash decision to experiment on themselves to prove their very sciency science serum is effective in increasing fertility. This leads to Arnold being impregnated with an egg stolen from a fellow researcher’s (and eventual love interest’s) competing project, fertilized by his own sperm. Their experiment is never supposed to continue past the first trimester, but Schwarzenegger’s shifting hormones convince him to carry the child full-time, against all logic & good taste. We watch in amusement/horror as pregnancy slowly opens his cold, dead heart to life’s simple joys and he finds true love with the researcher (a befuddled, Nutty Professor-mode Emma Thompson) whose egg he hijacked without consent. It’s all very conventional in a textbook romcom sense, except for the obvious deviation from that model in having the film’s emotional work carried on the back of a male, pregnant bodybuilder.

The strangest aspect of Junior is not the presence of a visibly pregnant Arnold Schwarzenegger, but the general absence of traditional jokes. Besides the absurdity of its premise and a couple stray jabs of gay panic humor, the film does little to reach for moments of over the top comedy. What’s left, then, is the uneasy feeling of watching DeVito & Schwarzenegger gestate a baby, which feels subversively bizarre only in the way it’s mostly played straight. DeVito compliments Schwarzenegger’s sperm in a flat, matter of fact tone, remarking “Strong swimmers. Big load. Way to go.” He penetrates Schwarzenegger’s abdominal wall to impregnate him with a giant needle, with little attention paid to how he will carry a baby without the help of a womb or umbilical cord. Schwarzenegger’s struggles with morning sickness, nipple soreness, and hormone-induced horniness are only amusing because of the physical presence of the actor conveying them. Besides a third act drag routine at an expectant mothers’ retreat or his action movie one-liner delivery of “My body, my choice,” there aren’t many comedic touches to his presence in the film. In fact, in a nightmare sequence where his face is superimposed over a screaming baby’s, a brief moment of mid-90s CGI, he can even be outright terrifying. 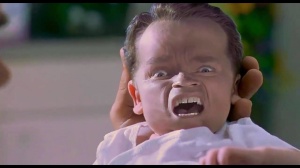 Junior‘s one joke begins & ends with its basic premise: Danny DeVito gets Arnold Schwarzenegger pregnant. There’s something perverse about playing that premise straight instead of reaching for a laugh-a-minute giggle fest, but the fact of the matter is that the film’s main attraction is the absurdity of its own existence. If you want to see DeVito & Schwarzenegger bounce off one another as a top of their game comedy duo, watch Twins. Junior should be reserved for when you want something other than humor: unease, confusion, and (in the case of the CG Arnold baby) horror. The film feels like Reitman somehow got away with a longform prank on pop culture at large. I’m sure he was tickled with the results, but he rest of us can hope to muster stunned awe.