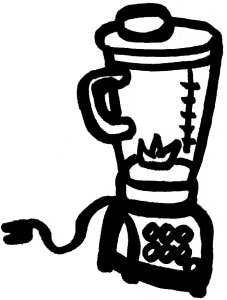 Within the opening two minutes of Death Spa I was already aware that I was in the presence of trash cinema greatness. The only other film I had previously seen from director Michael Fischer was the uninspired Teen Wolf knockoff My Mom’s a Werewolf (one of three releases he completed in ’89, along with something titled Crack House), so I didn’t expect to fall in love here so easily. Everything there is to love about this deranged supernatural horror is succinctly represented in the opening credits, though, immediately setting a very high expectation for over-the-top schlock being married to intense attention to craft, a dynamic I was delighted to discover the film lives up to. Death Spa is essentially what would happen if Chopping Mall were given the full arthouse, Suspiria treatment, the exact low premise/high execution dichotomy I look for in all my genre cinema. The film opens with an exterior shot of a Los Angeles gym with a lit neon sign that reads “Starbody Health Spa.” Lightning strikes the sign, leaving only the title “d ea th Spa” lit as the camera travels into the cursed building in an ominous tracking shot. Spooky synths & neon lights overwhelm the senses as the camera finds the only soul alive in the gym, a woman dancing alone to rhythmic music that we cannot hear. One gratuitous nudity scene later and she’s being cooked alive by a sauna gone haywire, activated by an off-screen killer. It’s immediately apparent in this opening sequence that Death Spa is exploitative sleaze. It’s also just as apparent that it’s fine art worthy of any pop culture museum that would house it.

The gym is a creepy place, presumably doubly so for women who’re working out alone after hours. Early in its runtime, Death Spa appears to be a shrewd exploration of that common fear, exploiting the vulnerability of publicly navigating a space designed to intensively focus on the human body among a wealth of potentially dangerous strangers. The camera takes on the first-person POV of a slasher film or a giallo, stalking vulnerable women in its neon & spandex health club setting. It even teases potential personal & financial reasons why several suspects would be committing the rampant murders (framed as accidental deaths) that start plaguing the gym. I was totally onboard with the grounded killer-on-the-loose horror teased in Death Spa’s earliest motions, but even more pleased by the deranged absurdity that unfolded instead. It turns out Death Spa isn’t about a psychopathic killer at all, but rather one of my very favorite genre film subjects: Evil Technology. In the film, a vengeful ghost hacks the computer systems of automated gym equipment as a means of real-world vengeance. This is more of a haunted house movie than a slasher, except that the house in question is a health spa with very specific methods for causing lethal damage: rogue weightlifting machines, loose diving boards, flying shower tiles, the aforementioned sauna steam, etc. It even telegraphs a Chekov’s blender gag at the gym’s smoothie bar later echoed in one of my most beloved Evil Technology horrors: Unfriended. There’s very little thought given to the inherent vulnerability of gymnasiums & voyeurism, something that plays like an afterthought at best in the movie’s true mission statement of staging a supernatural horror at a novelty fad location specific to its era. Instead of playing off real-world dread or having its characters at least figure out that a gym with lethally faulty equipment might not be worth their patronage, the movie instead gradually intensifies its computer-ghost mayhem as it builds to a climactic event where many patrons can be locked inside & slaughtered at once: a “Mardi Gras” costume party. In Los Angeles. At a health spa. At night. Insane, but adorably so.

In addition to the lunacy of a ghost hacking automated gym equipment, Death Spa also chooses to reveal the identity of the undead spirit/real world terror through a recurring nightmare of a disabled woman on fire, adding to the film’s menacingly surreal vibe. That nightmare logic is matched by overactive camera work that puts much more care into its movement, angles, and lighting than what’s typically afforded trash cinema of this caliber. That high art cinematography clashes harshly with the bargain bin quality of acting on-hand, with cult cinema vet Ken Foree standing out as the only notable performer. The spooky synth soundtrack also occasionally gives way to an incredibly misguided mouth harp sound effect, turning potentially effective scare scenes into total jokes. While the cast & the soundtrack occasionally show the seams of Death Spa’s budget, though, the film’s commitment to practical gore effects & the sheer lunacy of its plot is more than enough to carry it through. When the ghost hacks a shower head or a blender or romantically whispers to their victim, “Come with me into the inferno. Let’s die together and live forever in Hell,” it’s all but impossible to resist Death Spa’s delirious, over-the-top charms. It didn’t take much for the movie to win me over as an instant fan. Its swirling mix of synths, neon, and self-amused gore was more than enough to steal my trash-gobbling heart at first sight. The true joy of Death Spa, though, is that its cheap thrills don’t stop there. The movie pushes its evil health spa premise to the most ridiculous extreme it can manage on a straight-to-VHS 80s budget, a dedication in effort & craft I wish Fischer had also poured into My Mom’s a Werewolf. In fact, all movies in all genres could stand to be a little more like the heightened absurdity achieved in Death Spa, not just the ones about health craze fads & pissed-off computer-ghosts.