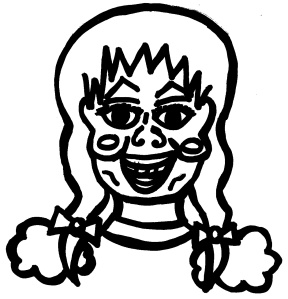 I hated the first Annabelle film. The second was passably okay. This movie eventually bests them both, but jeez is it ever an exhausting journey getting here. The problems that hinder this series from fully blossoming into the Evil Doll splatter fest it so easily could be are consistent throughout each entry. Firstly, despite her effectively spooky visual design, Annabelle herself is embarrassingly underutilized. She’s a cursed doll who does not move or stab or kill or speak on her own accord, robbing the series of the usual payoffs of the Evil Doll horror genre. Instead, Annabelle is a talisman used to extend the reach of The Conjuring franchise’s function as the Spooky MCU. Her titular homecoming here refers to her arrival in the basement of the paranormal-investigator couple The Warrens, who tie this loose extended universe of undead creepy-crawlies together with a bookended cameo in each picture. From there, Annabelle is sidelined in her own movie, as always, to make room for non-doll creatures to be brought in to individually audition for their own spin-off series, expanding the Conjurverse even further instead of paying off their full potential in the moment. Unless you’re crafting soap operas or wrestling angles, it’s an awful approach to storytelling, as it always promises satisfaction next time instead of emphasizing in-the-moment, self-contained stakes. Thanks to every single movie production company wanting what Marvel has, though, it’s now the norm in commercial filmmaking, which is getting increasingly frustrating.

All that said, Annabelle Comes Home at least openly accepts its role as a franchise brand extender whereas previous entries in its series have downplayed that function as much as they can – saving teasers for Conjuring spinoffs like The Nun for their post-credits stingers. Here, Annabelle operates as the Nick Fury of the Warrens’ basement, assembling undead ghoulies like The Ferryman, The Killer Wedding Dress, and The Werewolf Ghost to torture the teens she shares a house with, effectively auditioning each of them for their own Spooky MCU spinoffs. She’s contextualized as a “beacon for other sprits” within the movie to justify this indulgence, but that throwaway dialogue does little to reconcile with the fact that this is an Annabelle movie where Annabelle disappears for long stretches of time to make room for another Conjurverse monsters. Once again, this is an evil doll movie that has no interest at all in being an evil doll movie, which is maybe Annabelle’s true curse. The good news is that Annabelle Comes Home eventually does pack the screen with plenty of non-doll spookies off all shapes & sizes. Once all of Annabelle’s fellow spirits are set loose around the Warrens’ house to torture the Generic Teen Babysitters inside, the movie does reach a few blissful moments of midnight movie mayhem. It just takes a lot of franchise place-setting effort to make it to that point, when you could just watch a standalone free-for-all like Hausu or The Gate and get ten times the payoff for 1/10th the effort.

I don’t care about the Warrens. I rarely tune into dispatches from The Conjurverse unless the individual film in question happens to touch on a subgenre I generally have a weakness for – like the killer doll movie. All I wanted to see here was a creepy doll torture some teens, and I was made to settle for the swerve of a decent haunted house movie instead, just like how Annabelle: Creation was a ghost story and the original Annabelle was a Rosemary’s Baby bastardization – not one genuine killer doll movie among them. It’s disappointing, then, to see this potentially bonkers free-for-all dampened so extensively by its franchise-building requirements. We eventually make our way to a very simple, contained haunted house story but not until after a lengthy frame story wherein the Warrens take a joy ride through an Ed Woodian graveyard only to disappear until the film’s conclusion. Also, because each monster’s appearance here is just an appetizer for a possible future spin-off, we only get a small taste of creatures like Werewolf Ghost so that we’re hungry for more Werewolf Ghost Content the next time it’s offered to us; and the cycle continues. Annabelle Comes Home is an adequate enough mainstream horror flick. It may even be the best Annabelle film to date, once it fully warms up. It just also participates in the worst tendencies of franchise filmmaking of the 2010s, which is getting more exhausting the more ubiquitous it becomes.