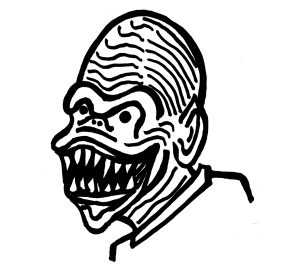 The opening twenty minutes of Nightbeast may very well be my favorite movie ever made. The other hour is pretty decent too. This $14k regional cheapie wastes no time trying to win its audience over, immediately flooding the screen with gorgeous D.I.Y. nightbeast action in a way that promises a nonstop low-fi special effects showcase. An incredible combo of collage animations & hand-built miniatures stage a spaceship crash in the forested wilderness outside Baltimore. The titular alien beast emerges from his wrecked ship with a raygun in hand and commences vaporizing all cops & townies in his path, revealing Looney Tunes body outlines where their corpses should be. Crosscuts between disembodied handguns firing and nightbeast reaction shots alternate at a strobelight pace. When not vaporizing victims in The Arrival-style animation effects, the nightbeast tears open their torsos with his giant claw, leaving a trail of post-Romero intestinal gore. It’s an incredible opening that’s extremely light on dialogue and extremely heavy on nightbeast. Then the creature loses his raygun and the movie loses its immediacy, slipping into a much more familiar mode of microbudget genre storytelling.

Once Nightbeast settles into constructing a plot, it isn’t sure what to do with itself, so it instead opts out in a way many late-70s, early-80s creature features did: lifting its story wholesale from Jaws. Despite protests from the town sheriff and the local science community, the grandstanding mayor of the small town the where the nightbeast crashed refuses to cancel a fundraising party & evacuate the city, putting his citizenry at unnecessary risk. There’s also a local, unrelated threat from a misogynist biker who strangles women who reject his sexual advances. Oh yeah, and the sheriff makes sensual love with one of his deputies. That’s it, at least until the nightbeast re-emerges for one final outburst of explosions & gore in the third “act.” It’s clear that local microbudget legend Don Dohler and his crew at the aptly titled Amazing Film Productions (including an early “music by” co-credit for a teenage J.J. Abrams) poured almost all of their money & effort into that bewildering first reel, gambling that the opening spectacle would be enough to carry the hour of comedown filler that follows. They weren’t wrong! There’s plenty of typical B-movie charm to the concluding hour of Nightbeast to maintain a goodwill for the cheap-o production on the whole, and then its final outburst of D.I.Y. practical effects spectacle is just enough to freshen your memory that it started off as an all-timer of a creature feature.

I’m a habitual sucker for this kind of communal “Let’s put on a show!” D.I.Y. filmmaking, and that enthusiasm for no-budget genre films may be required at the door to love this frontloaded frivolity for what it is. Despite featuring more sexual sleaze & gross-out gore than either camp (not to mention frequent John Waters player George Stover), this plays as a very wholesome middle ground between 1950s drive-in filler and Matt Farley’s regional horror comedies like Don’t Let the Riverbeast Get You!. The titular nightbeast spills a lot of blood & viscera in this small Maryland town, but in lingering close-ups he’s so charmingly quaint that I can’t help but think of him as a harmless cutie (especially in comparison with the grotesque serial-strangler subplot). Most audiences would be understandably frustrated with the way the film slips into Jaws-riffing tedium after the alien beast loses his spectacular cop-melting raygun, but I personally didn’t mind the cooldown too, too much. If anything, the go-nowhere melodrama in the second act and the final-minutes return to the initial spectacle provided context as to just how cheap this production really was, only making those opening twenty minutes more incredible in retrospect. The ambition of that opening is must-see trash cinema excellence, whether or not you find the more pedestrian hour that follows as charming as I do.