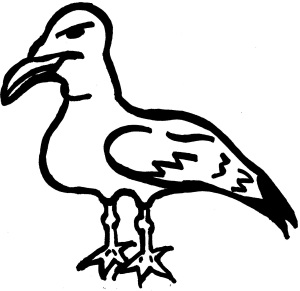 Watching Robert Eggers movies at a corporate multiplex feels like getting away with something perverse. Eggers has seemingly signed a deal with The Devil (A24) that allows him access to wide audiences for every aggressively Not For Everyone idea he has; the only catch is that the rooms these niche monstrosities play in are plagued by incrementally audible discomfort. As with The Witch, the audience I watched Eggers’s latest film with stormed out of the theater in a disgruntled huff – muttering variations of “What the fuck was that?” amongst themselves on the trail to the parking lot. To be fair, their confusion & frustration is entirely justified, as The Lighthouse is the kind of artsy-fartsy indulgence that you’d usually have to go out of your way to see at a tiny indie theater at the edge of town. A black & white period drama crammed into a squared-off aspect ratio, The Lighthouse mostly functions as an unholy, horned-up mashup of Guy Maddin & HP Lovecraft. It has no business sharing suburban megaplex marquees with the superhero spectacle of the week; at least not before earning the perceived legitimacy of Oscar Buzz. We’ve designated an entire festival-to-VOD distribution template to keep this kind of challenging, deranged nonsense out of the eyeline of the unsuspecting public. Watching Eggers’s films break away from its designated playpen to cause havoc in the burbs feels like cheering on a puppy that runs across the dinner table at an aristocratic banquet. The more people protest the funnier it becomes.

That’s not to say this is a stuffy Academic art piece without traditional entrainment value. The Lighthouse’s tight frame is packed to the walls with more sex, violence, and broad toilet humor than you’d typically expect from high-brow festival circuit Cinema. If you can push past the initial barriers of Eggers’s patient pacing & period-specific dialogue, the movie is a riot. Willem Dafoe & Robert Pattinson costar as a lighthouse-keeper odd couple who gradually grow insane with hate & lust for each other as the only company available on an isolated island rock. What’s “actually happening” in the story is deliberately obscured, as the combative pair’s descent into drunken madness continually disorients the audience to the point where it’s impossible to get our sea legs. The back half of the film is a roaring storm where time, place, and meaning are all drowned out by the two bearded seamen’s passionate clash of wills, and the film becomes more of a deranged experiment in mood & atmosphere than anything resembling linear storytelling. Still, their horniness for each other (and maybe-fictional mermaids), their constant farting in each other’s faces, and their drunken penchant for fisticuffs means this is never a dry academic exercise, despite Eggers’s painstakingly researched dialogue that makes it sound like an ancient, cursed novel. He even buried the title card that announces those research efforts deep into the credits instead of allowing it to immediately undercut the impact of the film’s transcendent conclusion, fixing the one problem I personally had with The Witch.

As delightfully bizarre & idiosyncratic as The Lighthouse can be, I don’t know that I can claim that there’s nothing else like it. Between The Forbidden Room, Cold Skin, and my beloved The Wild Boys you could piece together a neat little modern canon that this antique fever dream is nestled in, even if it is one of the clear standout specimens of that crop. The main difference to me is the value of the A24 marketing & distribution machine behind it, as the other movies of this cursed deep-sea ilk only made it to tiny arthouse theaters nearby, if they played on the big screen at all. The Lighthouse features two recognizable movie stars devouring scenery & each other at top volume. It’s like watching two Daniel Day-Lewises battling to drink each other’s milkshakes at the seaport to Hell. Even if I was the only audience member present who was tickled by those handsome seaside ghouls’ drunken struggles with merfolk, one-eyed seagulls, and divine lightbulbs, it was still heartwarming to see those perverse monstrosities eat up screen space at a corporate multiplex. The fact that the movie is so darkly fun on top of being such an obscured art piece only makes it feel like more of an outright prank on Normie America. In an age when tentpole franchise filmmaking is quarantining most of these bizarro art pieces to the straight-to-VOD wastelands, I’m always going to root for the stray beast that breaks free & runs wild – even if all it really has to say is “Having roommates sucks. And seagulls suck too.”