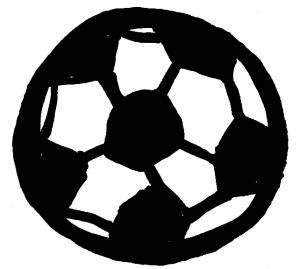 In the opening sequence of Diamantino, our bimbo antihero achieves a euphoric state of internal bliss while doing the one thing he’s good for: playing soccer. With all the world’s eyes on his every move, the greatest living footballer dissociates from his game-winning drive by mentally escaping to his Happy Place. Glittery pink storm clouds flood the screen, accompanied by stadium-scale puppies galloping along with our titular galoot as he scores the goal of a lifetime. There are two ways to achieve that kind of internal peace & total calm: years of practiced meditation, or starting off already empty-headed. The beautiful sweet idiot Diamantino falls firmly in that latter category, and the tragedy of the film is him losing that transcendent state of blissful ignorance (a natural gift he refers to as “The Fluffy Puppies”) as soon as he gains just a little knowledge of how awful the world truly is.

In that way, Diamantino is like a hotter, more chiseled version of Chauncey Gardner, the Peter Sellers character from Being There. Sexy enough to know he can get away with living an exclusively shirtless life but so intellectually sheltered from the real world he doesn’t realize how bizarre it is that he’s an adult virgin, this Zoolander-level underwear model of a man is too naïve to be real. And so, he functions mostly as a political allegory. While yachting with his overly controlling family who leach off his wealth, Diamantino discovers the existence of political refugees – spotting a raft of starving, petrified victims of war drifting towards the Portuguese coast. This revelation that the displacement of refugees and general human suffering are real-life social ills completely blows his feeble mind, which was previously only occupied by a narcissistic self-obsession and an ability to play soccer real good. The fluffy puppies disappear and Diamantino loses his sexy footballer mojo, making the only possible triumph of the film a path back to blissful ignorance.

Once exposed to the existence of human suffering & political turmoil, Diamantino falls down a rabbit hole of conspiracy theory intrigue, allowing the movie to take wild, unsubtle jabs at the disasters of MAGA & Brexit culture in particular. As soccer is described to be the true “opium of the masses,” disparate groups like the Portuguese Secret Service, The Ministry of Propaganda, and the James Bond-style corporate entity Lamborghini Genetics all conspire to exploit Diamantino’s celebrity for their own political gain. Meanwhile, the beefy oaf just wants to make himself feel better about the refugee crisis so he can frolic in the pink clouds of his own empty head with the Fluffy Puppies again. It’s a delightfully absurd political farce, bolstered by surreally cheap CGI and a peculiar sense of humor that alternates between wholesomeness & cruelty at a breakneck pace. The whole thing just winds up feeling like a fantasy movie adaptation of this meme (which I swear I mean as a compliment):