In 2017, a few members of the Swampflix crew decided to finally grow up and get serious about Mardi Gras. We collectively shed our annual personal crises about what themes to include in our Fat Tuesday costuming by pooling our resources to pray at the altar of a single cinematic deity: Divine. Arguably the greatest drag queen of all time, Divine was the frequent collaborator & long-time muse of one of our favorite filmmakers, John Waters. Her influence on the pop culture landscape extends far beyond the Pope of Trash’s Dreamlanders era, however, emanating to as far-reaching places as the San Franciscan performers The Cockettes, the punkification of disco, RuPaul’s Drag Race, and Disney’s The Little Mermaid. Our intent was to honor the Queen of Filth in all her fabulously fucked-up glory by maintaining a new Mardi Gras tradition in Krewe Divine, a costuming krewe meant to masquerade in the French Quarter on every Fat Tuesday into perpetuity.

Our initial krewe was a small group of Swampflix contributors: site co-founders Brandon Ledet & Britnee Lombas, regular contributor CC Chapman, and repeat podcast guest Virginia Ruth. We were later joined by local drag performer Ce Ce V DeMenthe, who frequently pays tribute to Divine in her performances. There’s no telling how Krewe Divine will expand or evolve from here as we do our best to honor the Queen of Filth in the future, but for now, enjoy some pictures from our 2020 excursion, our fourth year in operation as Swampflix’s official Mardi Gras krewe: 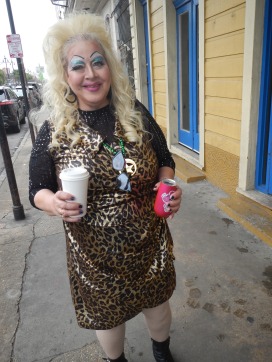 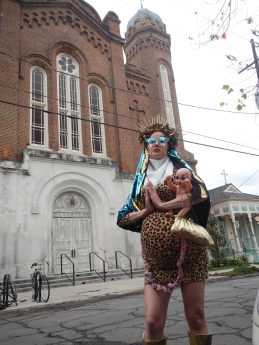