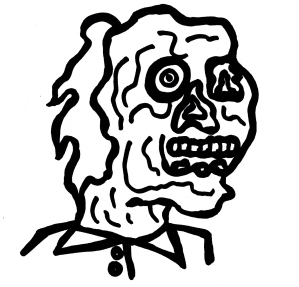 I’ve recently become enamored with the carefully curated Blu-ray releases of the Toronto-based Gold Ninja Video, which is positing itself as a boutique physical media label for low-end genre trash & D.I.Y. oddities. From bargain bin Brucesploitation titles like The Dragon Lives Again to backyard filmmaking curios like Impossible Horror to a Criterion Collection-level art cinema treatment for Matt Farley’s Local Legends (one of my favorite films of the 2010s), Gold Ninja Video has been consistently extraordinary in their dedication to unearth & uplift otherwise ignored castoffs from genre cinema’s furthest reaches. That impressive track record prompted me to take a chance on the label’s recent Blu-Ray release of Flesh Freaks, an amateur shot-on-video zombie flick from the late-VHS era. Flesh Freaks itself is—to put it mildly—not great, but when considered in the context of Gold Ninja’s catalog of discarded low-to-no-budget relics I do find it fascinating as a kind of historical document. This sub-professional, juvenile zombie flick is an artifact from a bygone era when that kind of novelty could land legitimate VHS rental store distribution instead of being directly uploaded into the digital void on platforms like Vimeo or YouTube. In the 2000s, Flesh Freaks qualified as a Real Move – one that even secured a Fangoria Magazine blurb on its Clip Art promotional poster. If released today, it’d be an easily ignorable YouTube preview window that remains forever unclicked.

The reason I’m dwelling on all this extratextual background info is that it’s far more fascinating than the actual onscreen content. When considered outside the context of its time or finances, Flesh Freaks is a dutifully mediocre zombie flick, one that’s only saved from total dead-air tedium by its spectacularly violent third act – a delightfully grotesque practical effects showcase (that unfortunately arrives too late to fully justify the long stretches of mediocrity that precedes it). The story goes that unscrupulous archeologists accidentally uncover an ancient curse from Mayan ruins in Belize, conjuring zombie-like creatures who slay everyone at their dig site – except one lone survivor. Once home at the University of Toronto, the survivor struggles to explain the horrors he encountered in Belize to his impatient, curious friends. He also—shocker—has carried the Mayan zombie curse back with him, unwittingly unleashing a full-scale outbreak on his college campus. This Torontonian back half of the film is both more fun to watch and more technically accomplished than the opening stretch in Belize. Yet, the film dwells on its Belizean travelogue opening for as long as it can manage, emphasizing its importance so drastically that the film feels rigidly bifurcated between the two settings (rather than the Central American portion functioning as a place-setting flashback the way it’s intended). It turns out that, like all things in Flesh Freaks, that decision is much more forgivable & interesting when considered in the context of how the film was produced & distributed.

Flesh Freaks is the passion project of Torontonian horror nerd Conall Pendergast, made when he was still a pimply teen. Pendergast stars in the film himself as the contaminated traveler, of course, which is the tell-tale sign of a young aspiring filmmaker playing around with a decent camera for the first time (usually out of financial necessity). He first conceived of the project while traveling with his archeologist parents to their actual dig site in Belize. Bored and isolated in a remote, foreign location, Pendergast made the shrewd decision to utilize his stunning deep-jungle surroundings as easy production value for a Real Movie. Only, his zombie-outbreak footage merely amounted to a mediocre short film, one that would need to be heavily embellished to approach the length of a proper feature. Once Pendergast got around to assembling this “extra” footage back at the University of Toronto, he had more time, experience, resources, and collaborators at this disposal – resulting in much stronger, more distinct work despite the pedestrian locale. As a result, it’s the Belize travelogue footage that registers as the film’s runtime-padding, not its college campus epilogue. By the time Flesh Freaks stages its handmade gore spectacle in its climactic final minutes it feels like the emergence of a fully formed filmmaker, one we’ve been watching gradually evolve out of the shot-on-video ooze the entire film. While most bored teenagers were playing video games and spending their pocket change on ditch weed, Conall Pendergast made a Real Movie, one with distribution that reached far beyond his local social circle. That is in itself a genre cinema miracle, even if the actual film is a standard, paint-by-numbers zombie cheapie.

Since Flesh Freaks is more substantive as a cultural artifact than it is as a feature film, its recent Blu-ray release from Gold Ninja Video is still a recommendable purchase for curious genre nerds even if the movie’s reviews are generally unenthusiastic. All the context required to consider the film as a fascinating, unearthed relic is easily accessible in the disc’s overloaded special features. Deleted scenes, filmmaker introductions, commentaries, essays, as well as bonus feature films & shorts from Pendergast are all included on the disc. It’s as if this were Criterion reviving some long-lost Bergman classic instead of a small indie label publishing heavily padded excerpts from a nu-metal era horror nerd’s vacation footage. There are some beautifully sculpted D.I.Y. creations in the film’s zombie-swarmed climax, but for the most part Flesh Freaks is nothing especially remarkable when considered on its own. If anything, it’s the kind of movie you’d usually pick out at random on Amazon Prime only to bail five minutes in for a more promising option. Gold Ninja Video doing the work to highlight why it’s important & exemplary of its era is the real story here. They did a great job uncovering this lost artifact.