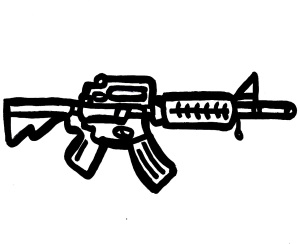 I’ve finally had my first Wakaliwood experience, thanks to the pandemic-inspired We Are One: A Global Film Festival charity event that ran for free on YouTube earlier this month. The D.I.Y. African movie studio has been operated out of the home of self-taught filmmaker Isaac Godfrey Geoffrey Nabwana (self-credited as Nabwana IGG) for a full decade now. It seems to be little more than a few laptops & cameras in the hands of amateur action-movie buffs in Kampala, Uganda, but its acclaim in Midnight Movie circles has been emphatically spreading for years now. Where most outsider-art cult movies of recent years have earned their notoriety through so-bad-it’s-good mockery from tragically insincere Film Bros (think Tommy Wiseau or Neil Breen or whoever’s responsible for the Birdemic Cinematic Universe), Wakaliwood pictures sidestep that pitfall entirely by having fun with the audience, allowing little room for anyone to mock them from a distance. There’s no way these micro-budget action thrillers could compete with the over-the-top spectacles of Hollywood franchises like Mission: Impossible or The Fast and the Furious, at least not in terms of resources or scale. Instead, they aim for a deliberate action-comedy bent, verbally acknowledging their quality as a bootleg version of Hollywood action franchises and inviting the audience to laugh along with them instead of mocking them from afar. When Tommy Wiseau was let in on The Joke, his schtick was ruined, and he hasn’t done anything genuinely interesting since The Room. By contrast, Wakaliwood was already having fun with their outsider-art oddities before a worldwide audience arrived to the party, so all anyone could do was join in the fun. I’m grateful that We Are One finally sent along my invite (courtesy of the Midnight Madness programmers at TIFF).

A lot of Wakaliwood’s unique it’s-all-a-party vibe is due to its in-house hype-man narrator, Emmie. Emmie is billed as the films’ VJ (“Video Joker”), a master of ceremonies who excitedly talks over the movies to explain their onscreen action (as if he were Silent Era title cards) and to keep the audience’s blood pumping. It’s as if the films had built in their own MST3k commentary team, except will all the show’s above-it-all Gen-X snark replaced with unembarrassed movie-nerd joy. Sometimes, the VJ interjects to establish characters’ motivations or to remind the audience who’s fighting on which side. More often, he’s just shouting energizing catchphrases like an exercise class instructor, keeping our heartrate up with gloriously redundant outbursts of “Supa!”, “Commando!”, and “Movie, movie, movie!” Nabwana IGG’s hyperactive editing style is similarly geared towards keeping the mood light & the audience constantly wired, cutting out all breathing room between cuts so all that’s onscreen is action & jokes alternating in dizzingly rapid succession. Curiously, the characters themselves seem to be aware of this constant need to push onto the next action sequence, as if they are aware they’re in a movie. When a husband is about to find his wife in bed with another man or an evil gang is about to clash with the film’s heroes, there’s usually an excited observer on hand to comment about how good of a movie we’re about to see, sometimes doing the VJ’s job for him before he gets to weigh in. It all plays into the communal, regional filmmaking vibe Nabwana IGG establishes with his hyperlocal Ugandan crew and his exponentially international audience at home. Everyone’s on the same footing, whether narrator, actor, or outside observer; we’re all invited to party.

In Crazy World, a Ugandan gang of kidnappers are thwarted by the unexpected Kung Fu skills of their pint-sized captives & the children’s enraged parents. In the 80s & 90s action movies Nabwana IGG is emulating (Commando, Cobra, Hard Target, etc.), the crooked network of child abductors would normally be taken down by a lone ex-military musclehead who is mysteriously unable to be struck by the bullets fired by dozens of enemies. Nabwana IGG opens up the playing field to allow as many of his local community actors to have their heroic Schwarzenegger moment as possible: returning characters from past Wakaliwood classics, a new crop of ”Kung Fu”-trained neighborhood children called The Waka Starz, and a random assortment of revenge-seeking parental figures who just want their kids back. The most notable of which is a once-reputable local man who becomes communally ignored as a homeless lunatic once his son is abducted by the evil gang. As the Video Joker solemnly explains, “He lost his child, then he lost his mind.” The title of the film is borrowed from the homeless man’s self-built shanty town, a reconstructed pile of trash from where he observes the comings & goings of the wicked kidnapping gang until he finds the right time to strike, using societal dismissal of mentally ill vagrants to hide in plain sight. None of this matters too much once the gang is actively overthrown by the community they terrorize, though, as he’s only one hero of many. It seems Nabwana IGG & his VJ mouthpiece especially want the Waka Starz to steal some of the homeless vigilante’s spotlight, repeatedly asserting that Crazy World is “The Greatest Kidz Movie Eva” despite the fact that it’s drenched in gunfire & bloodshed. The kids are adorably tough in their own moments of collective heroism, though, which really accentuates the movie’s charms as a document of hyperlocal communal filmmaking.

I can’t speak to how Crazy World compares to other films in the Wakaliwood canon, but it worked exceedingly well as an introduction to Nabwana IGG’s output for me. That often came across as a deliberate intention of the piece, as the movie periodically stops dead to promote the trailers for past & future Wakaliwood productions the audience should get hyped for. It worked too, as I was jotting down titles like Bad Black & Who Killed Captain Alex? as necessary homework assignments I needed to catch up with. Unfortunately, a documentary titled Once Upon a Time in Uganda was supposed to premiere at this year’s SXSW fest to help further spread the good word of Wakaliwood’s output but was preempted by our current COVID-19 pandemic. In what had to be my favorite aspect of Crazy World’s presentation on the We Are One platform, Nabwana IGG directly acknowledges that bizarre circumstance, interrupting the film’s action to deploy “anti-piracy enforcers” to online bootleggers’ homes across the globe via CG helicopters to apprehend them for stealing his movie. There is no shyness around self-promotion or copyright protection here. Characters will directly ask bootleggers onscreen “Do you know how hard it is to make a movie?” as a plea for compassion (as well as a for-its-own-sake comedic gag). It is damn hard to make a movie, something that makes Nabwana IGG’s growing media empire look even more enticing as a newcomer who’s far behind the curve. He has so many titles under his name, yet so few resources behind their production or distribution. In that way, he’s a true D.I.Y. filmmaking success story, and I’m incredibly excited to have finally stumbled into his crazy world.