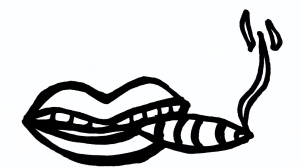 It’s difficult to describe Tito without overselling what it can deliver.  Seeking a middle ground between sensory-assaultive arthouse horror and broad stoner comedy, it’s often more of a genre experiment than a proper narrative film.  I almost want to describe it as the unlikely overlap between Josephine Decker and Cheech & Chong but, again, that’s probably overselling it.  If a no-budget genre mash-up that reeks of bong water & brimstone is the kind of thing you’d usually seek out (think Buzzard, Woodshock, Mangoshake, Ladyworld, etc.), then you’re just as much of a doomed soul as I am and will find plenty seeds & stems to catch buzz off of here.  However, anyone expecting the typical payoffs of either a typical arthouse horror or stoner buddy comedy will have their patience tested early & often.  Tito is a lot more interested in mood & process than it is in delivering the goods.

First-time director Grace Glowicki casts herself as an impossibly timid geek (the titular Tito) who’s drawn out of his cowardly seclusion by an idiot stoner who barges into his life uninvited (credited only as The Friendly Neighbor).  Meanwhile, vaguely menacing demons attempt to invade the frame but never arrive, sending Tito into constant panic attacks over a danger that no one else perceives.  That central performance is consistently entertaining, grotesque, and frustrating throughout, like babysitting Crispin Glover while he suffers a traumatically bad acid trip.  The genderfuckery of the casting does little to inform the text; Glowicki merely allows herself the space to improv the character quirks of a pathetic worm of a man.  It’s nearly the most off-putting performance I’ve seen all year, bested only by the grotesque child-creature in Vivarium.  The stoner neighbor is no more endearing, stomping through Tito’s hermetic home space as an overgrown, hedonistic toddler.  Their relationship is the sour, curdled leftovers of a typical stoner-buddy comedy dynamic: two mismatched losers who only become more obnoxious & mutually destructive the more joints they torch.  The demons don’t do much to break up that nauseating dynamic.  They don’t do much of anything at all.  They’re just around, unseen & in-wait.

If I’m being hard on the character traits of Tito in particular, it’s because I see too much of my own worst tendencies in his grotesque cowardice.  Watching the hunched over, perpetually petrified loser jump at every sudden noise and flinch at every microscopic sign of aggression from other men is too familiar to this socially anxious Indoor Kid, although absurdly exaggerated.  By the time Tito was cowering behind the one person he knows at a crowded bar, afraid to make eye contact with any of the strangers (or potential demons) that surrounds him, I found myself laughing just as much at my own social awkwardness as the off-putting quirks that are particular to the performance onscreen.  If Glowicki taps into anything solidly recognizable here, it’s the way that exaggerated social anxiety is reflected in both her performance and in the sensory overload of her editing-room tinkering.  Every one of Tito’s paranoid-stoner mood swings is married to a violent swerve in the soundtrack, so that the audience is equally tormented & unnerved even though nothing especially horrific is happening to him (besides being pressured to hang out with the world’s most annoying neighbor).  The music is Tito’s mood ring, distinguishing his content, idle cowering from his terrified, pants-shitting cowering, which would look pretty similar without that aural assist.

Beyond the film’s grotesque reflection of my own social awkwardness & cowardly response to macho aggression, I most appreciated Tito for its weird-for-weird’s sake pranks on the audience.  Watching Glowkicki puke up a flood of breakfast cereal, fall under the hypnosis of CGI porn simulators, and furiously blow a bright red whistle while her character’s stoner-bro foil shouts punishingly repetitive variations of “Dude!”, “Man!”, and “Brother!” was more than enough to justify the 70min time investment, even if just barely.  I can’t promise that most people will walk away from the experience feeling that same satisfied curiosity (or even promise that most people will make it to the end credits).  Again, I really am trying my best to not oversell it.