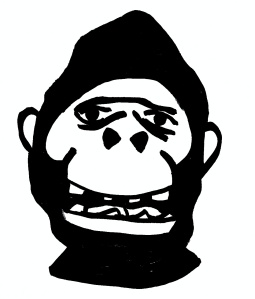 After Kong: Skull Island, War for the Planet of the Apes is the second time this year I attempted to put my boredom with cinematic war narratives aside to feed my hunger for eccentric creature features. The results were moderately better on this second go. Matt Reeves’s conclusion to his Apes prequel trilogy felt like a sincerity antidote to Skull Island‘s disingenuous SyFy Channel genre film throwback, which was far more conventional than its What If King Kong Fought In The Vietnam War? premise should have allowed. Not only does War for the Planet of the Apes cover similar territory in a more satisfying way; it also adds shades of World War POW camps, the Holocaust, American slavery, and the Malcolm X/Martin Luther King Jr philosophy divide to deepen the context of its Apes vs Humans war for the planet. It takes its wartime primates premise far more seriously than Kong: Skull Island attempts to, yet somehow emerges as a notably better example of summertime blockbuster spectacle, despite the season’s usual penchant for dumb fun. Its superiority to that overpriced B-movie aside, I can’t honestly say much else in praise of War for the Planet of the Apes. It’s an interesting film & a welcome excuse to escape the heat in a dark, air-conditioned room for two hours; but its nature as a straightforward war movie & a CG spectacle franchise cornerstone never allows it to amount to anything more substantial than that.

We rejoin the talking ape Caesar, played by eternal mo-cap prisoner Andy Serkis, as he attempts to maintain peace & order among his primate followers through simple credos like “Apes together strong,” and “Ape no kill ape.” Their plans to live peacefully in the woods are disrupted by a human militia headed by Woody Harrelson, who plays a warmonger who’s seen either Platoon or Full Metal Jacket one too many times in his life. This rogue colonel refuses to accept the apes’ peaceful request to be left alone in the wilderness. He slaughters large numbers from their ranks and eventually imprisons the survivors in an isolated stronghold he converts into a primate labor camp. Caesar and the colonel grimace at each other and trade gruff lines about who started/escalated the war and who they’ve both lost along the way for as long as the movie can put off two inevitabilities: an escape plan hatched by the ape prisoners & an all-out fire fight initiated by the humans. Somewhere during this grudge match two new characters introduce themselves to the fold: a mute child who’s clumsily coded as an archetype of Innocence & a Steve Zahn-esque buffoon played by sub-David Arquette buffoon Steve Zahn. As the war rages on, the developing details of the virus engineered in the first film are gradually revealed, opening the door for a kind of decisive finality to the series. The events of the film are tightly contained to a singular conflict, but dialogue hints that the struggle is linked to a more significant global crisis we never get to see.

I’m not sure that if you swapped out the apes with a more plausible rebel group like, say, Anarchists or Socialists, that I would find that same plot all that interesting, given my general aversion to this dour wartime end of cinema. That’s not the only issue making War for the Planet of the Apes feel like a moderate-at-best success, though. The apes look great; they’re believably animated in an eerie, modern CGI rendering that recalls the Disney-funded majesty of last year’s live action Jungle Book remake. The problem is that kind of CG spectacle isn’t all that interesting in the long run. As realistic as the apes look, they’re still just slightly off in a way that’s more distracting than it likely would have been if their image were more stylized. I’m not sure there was any point during the picture where I wasn’t thinking about the quality of the special effects, which isn’t anywhere near the top of my list of cinematic priorities. That kind of summertime special effects showcase typically comes with a long line of normalizing, Major Studio requirements too. There’s an oddly conspicuous Coca-Cola ad placement involving an abandoned 18-wheeler the camera lingers on for an eternity. The movie opens with a labored text scroll that attempts to walk the audience through the plot points & the “Rise/Dawn” title confusion of its two predecessors. It attempts to head off critics’ readymade puns like “Ape-ocalypse Now” & “The Great Esc-Ape” by making those allusions itself, which feels like a Major Studio brand attempting to control the conversation instead of allowing the film to be its own weird self. The whole ordeal just feels meticulously calculated & restrained.

Without question, the second entry in the Apes trilogy, Dawn of the Planet of the Apes, remains my favorite film in the franchise. There was something oddly wild & unpredictable about that film, which gifted the world one of my all-time favorite action movie images: the ape on horseback simultaneously operating two machine guns. I’m not sure there’s anything to be found in this follow-up that’s half as exciting as that image. Even Woody Harrelson’s character, who’s clearly supposed to echo Brando’s Colonel Kurtz performance from Apocalypse Now, feels fairly run of the mill for a crazed war movie villain. He nonchalantly shaves his head with a straight razor, wears sunglasses at inappropriate times, and eats apple slices off a combat knife; all of that macho posturing feels cinematically overfamiliar. By the time a Jimi Hendrix needle drop finds him listening to Vietnam War era rock alone at his boozy command station I felt as if I had already met this character a thousand times before. It was a beat that made me roll my eyes just as hard as any of Steve Zahn’s attempts to resurrect Pauly Shore humor or his silent little girl companion’s similarly cliché visual representations of Wartime Innocence (complete with tenderly earnest offers of a single flower). If it weren’t for the presence of CG apes in its central roles or the movie’s lengthy, silent stretches of sign language communication, War for the Planet of the Apes wouldn’t feel much different from any number of big budget war movies or grim franchise-closers. It’s competently made and visually impressive. It’s got a strikingly sorrowful brutality to it that helps distinguish it slightly from the other bombastic works of calculated studio bloat floating out there in the summertime blockbuster heat. Still, titles like Dawn or, better yet, Okja are exciting reminders that CG spectacle can be something much more idiosyncratic, more passionate, and more memorable than that. At least Kong: Skull Island is a fresh-on-the-mind counterpoint signaling that it also could’ve been much worse.