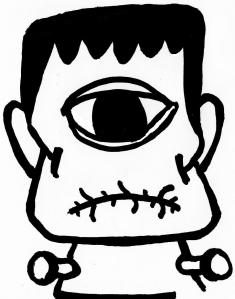 Reading over Wikipedia’s plot synopsis of I, Frankenstien makes me feel like a cinematic amnesiac. All the talk of “Gargoyle Order” weapons wielded to “ascend” and “descend” demons & gargoyles sounds vaguely familiar, but the particulars of what Bill Nighy, Dr. Frankenstein’s book or the supermodel scientist were up to are fuzzy at best. Mostly I remember Aaron Eckhart testing out his gruff Batman voice as if his former role as Harvey Dent was a consolation prize. There was some fun to be had in the climactic good versus evil fight scene (especially in the detail of costuming the evil demons in business suits) but for the most part the whole affair felt grim & indistinct.

I, Frankenstein is definitive proof that this post-Dark Knight era of sad sack superhero movies is reaching its nadir. Reinventing the monster movie by fusing it with the superhero genre is an idea loaded with fun potential, so (to quote a popular, hideous dorm room poster & t-shirt) why so serious? After all of I, Frankenstein’s ridiculous trailers & nominations for Worst Film of 2014, it at least gave the impression that it could’ve been amusing. Outside of minor details like the business suit demons, I get the sense that I was promised more goofy antics than were delivered.

I haven’t seen a single entry in the Underworld series, which shares writers & producers with I, Frankenstein, but from what I understand they’re just as bleak. To an outsider, the most bewildering aspect of the vampires/werewolves “action horror” series is that there are four of the damn things. Despite the lackluster critical response and general sense of drudgery, Underworld found enough of an audience to justify 7 hours of celluloid. Building off that hubris, I, Frankenstein all but offers an “Until Next Time” promise after the credits in its conspicuous aspirations of launching a new franchise. The problem (besides its uninspiring box office performance)? It’s not the only self-serious “action horror” Frankenstein product in the works.

2014 also saw the release of Universal Studios’ first entry in the planned Shared Universe® for its classic monsters characters: Dracula Untold. For the most part the movie was Dracula Unremarkable, but there were some (underutilized) bright spots: the vampire deaths were surprisingly gruesome considering the PG-13 rating (a heap of melted flesh instead of I, Frankenstein’s more symbolic “descending”) and Charles “The Man” Dance made the most out of his limited role as the head vampire. Just as I, Frankenstein felt like little more than dull goth superhero franchise kindling, Dracula Untold was mostly a “this is just the beginning” letdown of a story. One of the other goth superheroes on the Universal docket, waiting to join Dracula’s ranks: Frankenstein’s monster.

Given the unlikely longevity of the Underworld series it’s possible that Lionsgate will ignore the Universal Studios famous monsters universe and we’ll live in a world with two dueling Gritty Reboot® Super Frankenstein franchises nobody asked for. Hopefully an I, Frankenstein, II would ditch the self-serious tone and work in more business-suit-demons humor, but I wouldn’t hold your undead, crime-fighting breath. Seriously, don’t hold it. It’s criminal for movies this ridiculous in premise to be so severe, but they’re unlikely to change their ways as long as they’re making money. Or in I, Frankenstein‘s case, at least breaking even.

I, Frankenstein is currently streaming on Netflix & Amazon Prime.