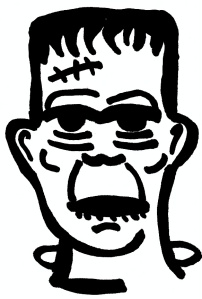 In the press/apology tour for Victor Frankenstein (critics have not been kind), director Paul McGuigan has been quoted as saying that Mary Shelly’s 1818 novel Frankenstein; or, The Modern Prometheus is “dull as dishwater“, not a surprising sentiment in light of how his film approaches its source material. Victor Frankenstein has the same reverence for Mary Shelly’s Frankenstein that Hansel & Gretel: Witch Hunters has for its Brothers Grimm origins. It’s so distanced from the novel, in fact, that I didn’t spot a single mention given to Mary Shelly in the final credits. Not even a “characters by” shout-out. Oddly enough, I think it’s that exact flippant approach to the now classic horror tale that makes the film an enjoyable (and mostly intentional) camp fest. Well, that & over-the-top performances from James McAvoy as the mad scientist Frankenstein, Daniel Radcliffe as the groveling Igor, and Andrew Scott as a soft spoken police inspector on a mission from God.

At first, it seems as though Victor Frankenstein doesn’t bring any new ideas to the table for a property that’s been already adapted for the screen roughly 50,000 times (including last year’s dismal I, Frankenstein). McAvoy’s feverish, spit-flinging performance is inspired in terms of camp value, but the movie’s early declarations like, “Life is temporary, so why should death be any different?” and “The world remembers the monster, but not the man . . , But sometimes the monster is the man,” aren’t particularly fresh, but rather a stitched-together homunculus made of old leftover movie parts. Eventually, however, a clear narrative appears. As the God-fearing police investigator starts butting heads with Frankenstein, it becomes clear that the film is a campy battle between Atheism vs. Christianity, Science vs. Faith. The policeman is incensed that the mad scientist is on a mission “to create life in direct, violent action against God,” claiming that he’s “in allegiance with Satan.” Frankenstein snaps back, “There is no Satan, no God, no me.” This aspect of the film is obsessively explored to the point that is plays as 100% sincere, but ultimately feels just as ridiculous as any of its outright horror comedy gags.

Half-cooked philosophy aside, there’s plenty of goofy charms that make the film surprisingly enjoyable as a camp fest. An early origin story for Igor that features Harry Potter crouched over in heavy clown make-up works as literal bread & circuses. Moving the narrative from a remote castle to the inner city gives it a distinct Tim Burton tone, particularly the movie Sweeney Todd. The film’s costume design is gorgeous (especially in the love interest & Downton Abbey vet Jessica Brown Findlay’s dresses & McAvoy’s vests), but the rest of the imagery is absurdly nasty. Grotesque practical effects surrounding bodily horror like eyes & other organs suspended in jars, steam punk medical tools, abscess fluid, and an early Frankenstein monster prototype (a chimp-esque “meat sculpture” homunculus made of dead animal parts) are all pitch perfect in their absurdity. The actual Frankenstein monster almost feels like a last-minute afterthought, but is ultimately satisfying in its design, looking like a mutant pro wrestler or Goro, the big boss character from Mortal Kombat, except with extra internal organs instead of extra limbs. Ultimately, though, it’s the over-the-top acting of its three heads that sell the movie as an absurdist slice of mindless entertainment.

It’s difficult to say if this was an intentional element to the movie’s  Max Landis screenplay, but the film also has an interesting level of homosexual subtext in the relationship between Igor & his master, which manifests both in subtle moments of body language & romantic jealousy as well as more obvious moments like when Frankenstein shouts about sperm in the only scene where he’s shown conversing with women. Again, it’s difficult to tell if this was Landis’ screenplay or McAvoy & Radcliffe’s performances in action, but it’s just another element in play to a surprisingly enjoyable film with an already-negative reputation due to its indifference for its source material & flights of ugly frivolity. Victor Frankenstein‘s latent homosexuality (which really does stretch just beyond the bounds of bromance), laughable atheism, and grotesque body humor all play like they were written in a late-night, whiskey-fuelled stupor, the same way the film’s monster was constructed by the titular mad scientist drunk & his perpetually terrified consort.  I know I’m alone here, but my only complaint about this film is that it could’ve pushed its more  ridiculous territory even further from Mary Shelly’s original vision, with Victor planting wet kisses on Igor’s cheeks & Rocky Horror‘s “In just seven days, I can make you a man . . .” blaring on the soundtrack.