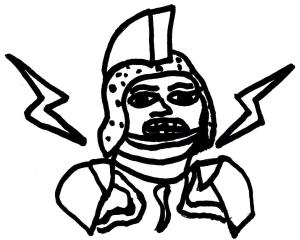 In honor of Arnold Schwarzenegger’s induction into the WWE Celebrity Hall of Fame, it seemed appropriate to revisit 1987’s The Running Man, a pro-wrestling meets dystopian sci-fi film that helped cement the actor as a cultural icon.

Some action movies feature exploding heads, but few include them by the end of the opening credits. In this violent video game of a movie, human heads are not only exploded in the opening sequence, they’re also burned, shot, impaled and electrified later on. All of this head-squashing takes place around Ben Richards, a former soldier being framed for the deaths of innocent women & children, as he becomes an unwilling contestant on a sadistic gameshow. Richards must fight his way through a gauntlet of assassins (each with their own wrestling-friendly gimmick personas like Fireball, Buzzsaw, Dynamo and Subzero) as bloodthirsty spectators, including grandmothers and children, watch on eagerly. The dystopian hell of Running Man is set in 2017, but thankfully the game shows of today have not sunk to the depraved levels predicted in the film (if you don’t include Fear Factor).

The original host of Family Feud, Richard Dawson, plays the show’s sleazy, always inebriated host in a performance that doesn’t feel far removed from how Dawson himself acted on his real-life gameshow (where he shamelessly kissed & fondled contestants). Dawson chews the scenery every time he’s on-screen, but is just one of the many memorable cameos in the film. Mick Fleetwood, the infamous drummer for Fleetwood Mac, also makes an appearance as a coked out revolutionary. Then there’s the former governor of Minnesota & pro wrestler Jesse “The Body” Ventura as Captain Freedom, who pummels Richards inside a steel death cage in the film’s best scene. As well as being the best, the death cage scene is also the film’s most violent, because in Running Man the two are one in the same.

Truth is, although Arnold’s protagonist in the main attraction, The Running Man never feels like his film. Easily upstaged by the bigger personalities around him, Ben Richards is one of the weaker roles of Arnold’s career. For most of the film he is simply there, acting like a dick until he has to step into action and kill something. He does have a few good one-liners, though, like the Arnold staple “I’ll be back” and my personal favorite, “I’ll tell you what I think of it: I live to see you eat that contract, but I hope you leave enough room for my fist because I’m going to ram it into your stomach and break your goddamn spine!” Despite the one-liners, even María Conchita Alonso (as Arnold’s standard girl-he-kidnaps-who-then-falls-for-him) gives a fiery performance with what little room she is allowed, sometimes outshining Arnold’s.

According to Wikipedia, Arnold stated that the director “shot the movie like it was a television show, losing all the deeper themes.” He is right in that The Running Man never really delves into the social satire that was present in the 1982 Stephen King novel the film was based on. Instead, the film is highly entertaining because of its over-the-top violence, breakneck pacing, and great cameos. I doubt King is a fan of professional wrestling, but the film adaption of The Running Man is like an ultra-violent WrestleMania. Vince McMahon would approve even if King & Schwarzenegger didn’t.