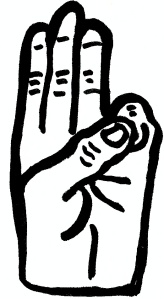 I’ve enjoyed following the Hunger Games saga, both as a series of YA novels & and as a series of dystopian sci-fi film. It’s a pretty grim franchise for something a lot of people consider “kids’ stuff”, one that takes its forcing-to-children-to-fight-to-the-death-for-entertainment premise very seriously. Its haves-vs-have-nots dystopian world-building is nothing particularly new and can especially be seen telegraphed in properties like Battle Royale & The Running Man, but I think it’s a pretty great sci-fi intro for teens, especially refreshing for its strong female protagonist Katniss Everdeen (played by Jennifer Lawrence in the films, duh) & in the way its potentially-corrosive love triangle conflict is handled. One strange aspect for me has been how the film versions of the Hunger Games trilogy have resisted the law of diminishing returns. I felt that Suzanne Collins’ novels started at their strongest point, doing a great job of establishing an in-the-moment intensity in its abysmal future-world by dragging the audience along closely with Katniss’ experience navigating the Hunger Games. The quality dropped off a bit for me in the sequels, though, as the pacing seemed to get away from Collins and large swaths of summarizing overtook the focused intimacy of early scenes. The first movie was pretty great as well, doing a good job of capturing Katniss’ in-the-moment POV, but the film series subsequently seemed to improve from there, knowing exactly what to show & what to ignore in Collins’ sprawling narrative for maximum effect. 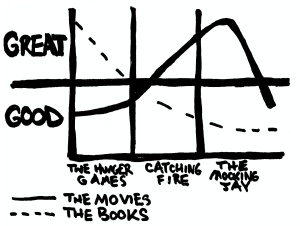 Mockingjay – Part I might just be the pinnacle of the Hunger Games movies for me. General consensus has the franchise peaking with the second film, Catching Fire, but I’d say it’s at the very least a close call. the film’s themes of PTSD, regret, powerlessness, and the pressures of being the face of a revolution all hit me pretty hard. I’ve heard friends & family describe the film as boring, saying nothing happened, which is pretty surprising for a film with such a high bodycount & grandscale warfare, but I had a genuinely emotional reaction to its horrors, getting teary-eyed at the film’s hospital bombings, mass graves, and three-fingered solutes. Its murderers’ row of talented actors certainly didn’t hurt: Philip Seymour Hoffman, Julianne Moore, Jeffrey Wright, Natalie Dormer, and Donald Sutehrland are all at the top of their game here, which is really saying something. I also appreciated scenes of Jennifer Lawrence, who is an incredibly gifted actor, pretending to be an incredibly inept actor as Katniss fails miserably to produce convincing propaganda clips to rally support for a revolution. Mockingjay – Part I‘s riots, uprisings, strikes, and rescue missions were all a lot more satisfying to me than expected & Lawrence deserves a lot of credit for anchoring the film’s emotional resonance.

Mockingjay – Part II unfortunately didn’t hold up quite as well for me. I think the issue is that Collins’ summarizing had gotten out of control by the final book, so that the film version struggles to make individual scenes count for much as it chases an exponential momentum of a plot trying to wrap up a widespread political revolution, a small family’s struggle to remain a unit, and a strained, increasingly bitter love triangle in just two hours time. There were a few small moments to enjoy in the chaos — my favorite was when Katniss is called out for the “tacky romance drama” & cliché  “the one” specialness of her mythology at a wedding — but for the most part the films struggles to let its Big Moments properly breathe. Mocking Jay – Part II‘s killer C.H.U.D.s & third act Major Character Death both failed to land with full impact thanks to the runaway momentum of Collins’ plot & pacing. And because director Francis Lawrence did such a great job with Catching Fire & Mockingjay – Part I, I’m willing to give him the benefit of the doubt & suppose that the rushed nature of Mockingjay – Part II was far from his fault. Considering all of the ground that the novel covers (I’m struggling not to go long here just touching on it), Francis Lawrence  could’ve stretched Mockingjay into its own separate trilogy & given each underserved scene its own proper moment to shine.

I can’t imagine impatient fans, who groused about splitting the finale into two parts in the first place, would’ve been receptive to a Mockingjay – Part III,  though. If you consider that Francis Lawrence had no choice but to split the finale into two parts, I think he did a great job of adapting a difficult work of fiction for the screen. Mockingjay – Part I carries the emotional weight the film series as earned over the last few years & Mockingjay – Part II does the necessary work of bringing the whole thing to a close. The two halves function well together as a single, four-hour feature. One picks up exactly where the other leaves off & together they do a satisfactory job of carrying a work that’s spread pretty thin to a convincing conclusion. Although I’d contend that Part I is the far superior picture, they average out to something pretty great in the end, which fairly unusual for the third film in a sci-fi trilogy.

Bonus points: I’d like to take this opportunity to give kudos to the Hunger Games series for being the only action franchise I can think of where fashion as an artform plays a deeply integral part to the films’ central themes. I particularly liked a moment in Mockingjay where Katniss is told she’ll be “the best dressed rebel in history” & it’s a sentiment that actually means something significant. It’s a cool, distinguishing detail, if nothing else.