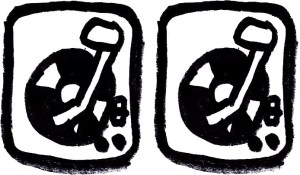 Initially pitched to the audience as a history of the underground hip-hop record label Stones Throw, Our Vinyl Weighs a Ton actually works a lot more like an in-depth mental profile of the label’s founder, influential DJ Peanut Butter Wolf. That’s because the label’s identity is so closely linked to Wolf’s. The periods of creative excitement & devastating losses that shape Peanut Butter Wolf’s life also shape the history of his record label. Stones Throw is Wolf’s life’s work, so it makes sense that his life would have so much influence over its general sound & direction.

It makes sense then that the story of Our Vinyl Weighs a Ton begins long before the founding of Stones Throw. Providing childhood photos & home videos from Peanut Butter Wolf’s youth, the documentary shows us a young nerdy white dude as he grows in his music tastes from funk & disco to new-wave & punk to hip-hop, where he finds his calling as a taste-maker. Even in his younger days, before the turntables, Wolf is shown making mixtapes & playing curator, a skill that will later prove vital to his legacy. It’s when Wolf begins to collaborate with young rapper Charizma that his music career takes a definite shape and it’s after Charizma’s tragic, far-too-soon death that he becomes determined to make something of it. This is just one of many tragic losses Peanut Butter Wolf would suffer over the years, and it’s not until he gets excited by working with new collaborators that he can truly move on & grow.

The list of Peanut Butter Wolf’s collaborators interviewed in Our Vinyl Weighs a Ton is a staggering who’s-who of underground hip-hop & outsider indie music: Madlib, J Dilla, MF Doom, Common, and Anika are only a fraction of voices heard here. The interesting thing about these interviews is that the subjects are all too-smart-for-their-own-good nerds who are super awkward when faced with the scrutiny of a documentary crew. Because its subjects are so soft-spoken & nervous, the film has essentially no choice but to let the work speak for itself. An original score by Madlib (one of the label’s most influential contributors), throwback animation sequences, and rare footage of reclusive acts that don’t normally get a lot of face time all combine to show exactly what makes Stones Throw’s vibe so special. As Peanut Butter Wolf puts it, he sees his label as a stomping ground, a launching pad for people to move on from. The work isn’t always spectacular (to the documentary’s credit it doesn’t look away when Wolf gets into producing some really douchey Los Angeles weirdness), but it’s incredible how much work was made possible by a single man who knows great music when he hears it & knows how to bring out the best in his collaborators. For anyone interested in exactly how everything Peanut Butter Wolf’s put together came to be, Our Vinyl Weighs a Ton is an essential document. I’m not sure anyone who’s not a hip-hop nerd will be as pleased, but they might find themselves nerding out despite themselves.