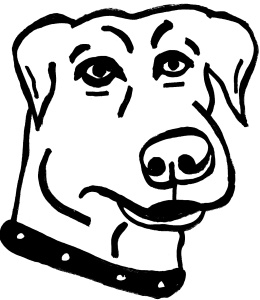 White God opens with an immediate delivery of its basic hook: a canine revolution. Our young teen protagonist Lili is shown biking down empty city streets, passing the same vacant cars & eerie urban voids that begin 28 Days Later. Before you can piece together an answer to “What happened here?” Lili meets a canine flood. Hundreds of real-life pups chase her down the road, suggesting some kind of Dogpocalypse. Even in these opening minutes you’re overwhelmed with the feeling that White God is an instant classic or, at the very least, something you’re not likely to see too many times in your life. The trick is once it has you on the hook with a taste of what’s to come, it has to earn the grand scale lunacy of that moment, which the film backtracks to accomplish with an intense tale of (somewhat supernatural) revenge.

Although Lili is first shown bracing the Dogpocalypse by herself, she’s far from alone in this world. Her pet mutt Hagen is Lili’s right hand dog, forming a strong sense of solidarity with her as the pair is passed off to her meat inspector father for a three month visit. Lili’s father is not fond of the dog, to say the least, and at first it’s tough to see his tenderness for his own daughter as well. The parallels between Lili & Hagen are established as early as when they’re being passed off to the nonplussed meat inspector at his slaughterhouse workplace. As they’re walked to his car, two cows are literally marched to the slaughter, hammering home the metaphor as much as possible in visual shorthand. As Hagen is shouted at, dragged by the collar, isolated, and abused throughout the film, Lili is similarly pushed around by the cops, teachers, and parental figures of her life. Her coming of age story poses a teenage girl’s lack of autonomy to be just as miserable & vulnerable as that of an abused street dog. As Hagen hurts his paw, Lili injures her leg. As Hagen’s filmed galloping down city streets, Lili prowls the very same locations on her bicycle, etc.

As similar as their troubled paths may be, however, it’s difficult to argue that Lili’s struggles with authority figures & indifferent older crushes are nearly as devastating as the indignities Hagen suffers. A mixed-breed street dog, Hagen is cruelly treated by every human being in his life in a gradually escalating gauntlet of abuse. After the cold beratement he suffers from Lili’s father, Hagen is abandoned roadside & left to fend for himself. A large part of the movie’s narrative takes a dog’s POV in a style that’s much more akin to the harsh realities of Baxter than it is to Homeward Bound. The confusing chaos of ducking through traffic, scavenging for puddles to drink & garbage to eat, and curiously pawing at roadkill are only the start to Hagen’s perilous journey. He initially makes enemies with animal control, a villain the film holds common with Shaun the Sheep & Babe 2: Pig in the City, but then his growing list of wrongdoers escalates to include butcher shop employees, desperate & homeless fiends, and heartless animal shelter brutes. Worst of all is an organized dogfighting ring (portrayed here in disturbing detail) that systematically abuses Hagen into becoming a trained killer instead of the sappy sweetheart he was in Lili’s protection. Speaking of Lili, even she becomes culpable in Hagen’s abuse as she gets so distracted with her own life that she gives up looking for her best friend, who’d been left to survive alone.

The good news is that as much as White God tests the strength & patience of animal lovers’ hearts (that dogfighting ring sequence is particularly brutal), it also delivers the immense sweetness of abused dogs’ revenge in a way so satisfying & so calculated that it approaches the supernatural. The final half hour of the film, which features extended sequences of Dogpocalypse mayhem & very precise acts of revenge on Hagen’s list of enemies, reaches a grand scale crescendo of chaos that rivals anything you’d see in a more well-funded natural horror film, like a Godzilla or a King Kong. White God pulls a surprising amount of pathos out of a dog’s dialogue-free journey through various forms of cruel captivity, whether he’s displaying the unbridled freedom of a leashless run, assembling a gang of dogpound miscreants (in curiously butsniffing-free exchanges), or, sadly, transforming from a kind soul to a hardened killer. Dogs really do just want to please us. They want to make us proud, asking only for love & attention in return. Even if you can see where the movie is going in its final minutes as Lili answers for her own participation in Hagen’s abandonment & resulting abuse, the climax still hits hard. Both in the sheer joy of beholding seemingly all of the world’s abused dogs exact their revenge on us human scum & in the tender intimacy of watching two wounded animals, Hagen & Lili, facing off & reconciling their pasts, White God makes every ounce of suffering that came before the climax well worth it. It’s a rare, satisfying conclusion of a genuinely strange film that gratifies both in its willingness to go over the top & in its ability to touch you emotionally.