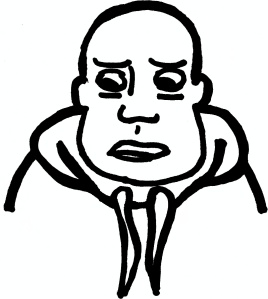 While we were discussing September’s Movie of the Month, 1990’s The Boyfriend School, it was amusing to me that no one around here could muster anything cruelly negative to say about the film’s male lead, Steve Guttenberg. Once upon a time Guttenberg starred in a relentless onslaught of successful, but mediocre comedies (including Short Circuit, Three Men & a Baby, and far too many Police Academy sequels), amounting to a high profile on the Hollywood landscape that felt at best incongruous with the man’s modest level of talent & low-key natural charisma. Perhaps feeling that the Hollywood machine was pushing an undeserving everyman down their throats, moviegoers eventually reduced The Gutte to a sort of a fad & a punchline. Guttenberg has never been able to recreate the success streak he achieved in the 1980s & the mention of his name is more likely to elicit a mild chuckle than any more desirable reaction. Being slightly too young to remember a time when Guttenberg was a disingenuous cinematic omnipresence, I’ve always had a sort of mild ambivalence to the actor, but more recently I’ve discovered that I’ve grown to actually love seeing him pop up in unexpected projects. Nostalgia has been kind The Gutte. After enjoying his performances in a few of his stranger, off-the-beaten-path roles, I genuinely get excited whenever he’s involved in something worth watching. Detailed below are the five performances that shaped my personal path to learning to stop worrying and start loving The Gutte, hopefully serving as a guide to those who want to leave their Guttenberg hate in the distant past where it belongs.

The first time I can recall having a strongly positive reaction to Steve Guttenberg was in an episode of the (sadly defunct) television show Party Down titled “Steve Guttenberg’s Birthday.” Within the episode, the titular catering service (featuring such talented comedians as Adam Scott, Ken Marino, Megan Mullally, Lizzy Caplan, Martin Starr, etc.) arrive at the swanky mansion of Steve Guttenberg (playing himself, of course) only to discover that he had already celebrated his birthday & forgot to cancel the catering. Not wanting the food to go to waste, Guttenberg improbably invites the crew inside to enjoy a wild night of drinking (fine vintage wines from his personal collection), philosophy, workshopping, and frank discussions of art. It’s an incredibly funny & endearing performance from Guttenberg, one that makes for one of the best episodes of the entire series (no small feat, that). I later discovered that this was not the first time Guttenberg had worked with Party Down‘s producer Rob Thomas. The Gutte was also a major figure in the second season of Thomas’ cult television show Veronica Mars, playing mayoral hopeful & monstrous reprobate Woody Goodman. It’s difficult to discuss much of Goodman’s story arc without spilling  the beans on a few of the season’s surprises (it was a mystery show, after all), but I will say that it gave Guttenberg a chance to play cold & sinister notes that aren’t normally afforded his normal roles as affable goofballs. In fact, both of Guttenberg’s collaborations with Thomas revealed aspects to his onscreen presence that suggest a depth of talent that’s gone shamelessly unmined (no offense to fans of Police Academy 4: Citizens on Patrol). It would be great to see more of this subversion of The Gutte’s usual schtick in the future, even if it only amounts to a cameo on Thomas’ current project, the far-better-than-it-should-be iZombie.

Thanks to a sublimely silly review by our own Britnee Lombas, I eventually discovered that one of Steve Guttenberg’s strangest roles was also one of his earliest. In 1980, The Gutte starred as a DJ/rollerblade enthusiast in the Village People movie Can’t Stop the Music. Although as a musical act the Village People were designed to be a cynical cash grab aimed at the popularity of disco among homosexual audiences, the Village People movie is almost completely scrubbed of anything non-heteronormative (something Britnee & I discussed at length in our Swampchat on the film) and Guttenberg was used as the central bait & switch. Although the promise of Can’t Stop the Music is a film starring The Village People, it’s actually a film starring a then-nobody Steve Guttenberg, with The Village People (along with celebrity athlete Bruce Jenner) serving mostly as accessories & much needed dance breaks. Guttenbeg’s performance is mostly just serviceably dorky (and sexually incongruous) in Can’t Stop the Music, but he does hold one of the film’s best moments in the opening sequence. I dare you to watch The Gutte rollerskating to maddeningly repetitious lyrics about “New York, New York, New York” at the beginning of the film & not love the goof just a little, little bit. It worked for me, at least.

By another suggestion from Britnee, I of course re-encountered The Gutte in the 1990 romcom The Boyfriend School. Well, “romcom” might be a little bit of a misnomer there. Long stretches of The Boyfriend School (aka Don’t Tell Her It’s Me) play like a horrifying exercise in cringe comedy, one that subjects Guttenberg’s protagonist to a long list of indignities that include Hodgkin’s lymphoma, being pressured into living a false identity, and getting goaded into committing an act of sexual assault. So much unsightly suffering is piled on Guttenberg’s protagonist (especially for a romcom) that I felt as if the film were somehow a punishment a producer was putting Guttenberg through to atone for the sins of his mid 80s omnipresence. As I put it in our Swampchat earlier this month, “Throughout the endless parade of embarrassments (especially in the first half of the film), my brain was screaming ‘This is Hell! This is Hell! Set him free!’ The Gutte may not have been exactly deserving of his ludicrously overblown success, but surely this punishment was a little rough for even him.” Guttenberg’s performance in the film is amusingly silly at times, especially in his post-cancer Uncle Fester makeup & his New Zealand biker alter-ego Lobo, but what really rings loudly in the film is a distinct sense of sympathetic suffering. I ended up liking The Gutte more after The Boyfriend School, if nothing else, just because I felt so sorry for him.

More than a decade after his 80s omnipresence, but years before his subversive turn on Veronica Mars, Steve Guttenberg found himself wrapped up in a personal passion project, P.S. Your Cat is Dead!. Much like with his turn as himself on Party Down, there’s a meta aspect of Your Cat that makes the film interesting as a Guttenberg oddity. Throwing on some nerdy glasses & unshaven Gen-X grime, Guttenberg plays a struggling stage actor & playwright who has recently reached a professional low with the failure of his one-man production of Hamlet. Following this blow, he loses the sole copy of a manuscript he’s been tirelessly working on & his girlfriend leaves him on New Year’s Eve. That’s not even to mention that his cat is deathly ill & currently receiving overnight treatment at the vet. All of this tension leads to The Gutte’s long-suffering artist to capture a burglar (& frequent uninvited visitor) in the act for a long night of psychological torture & surprisingly poignant exchanges that eventually leads to, surprisingly enough, deep-seated questions about his own sexuality. As far as labors of love go, P.S. Your Cat is Dead! is an interesting glimpse into what makes The Gutte tick. A small indie picture with homosexual connotations was never going to reignite Guttenberg’s career as a leading man, but it was still a picture he decided to star in, produce, and direct (his sole feature credit as a director), presumably because he was such a fan of the material’s origins as a play. P.S. Your Cat is Dead! is by no means a knockout, phenomenal picture (and honestly not all of the homosexual content has aged very well), but it is a low-key look at a different side of The Gutte, one that possibly could’ve enjoyed a career as a mediocre Woody Allen devotee. It’s likely to be the closest you’ll ever see the actor actually fulfilling the genteel artiste characteristics he’s assigned in Party Down, something I’ve honestly come to cherish.

Speaking of meta content, Guttenberg plays yet another actor in the recent Asylum mockbuster Lavalantula. I first heard of the 2015 CGI creature feature from our contributor Erin Kinchen in the Boyfriend School Swampchat, where she said, “[Guttenberg’s] latest credit seems to be for Lavalantula.  If you are thinking that this is a move about giant and horrifying lava spewing tarantulas, then you are absolutely correct.  Could it be a hidden gem in the land of self-aware, poorly produced B movies?  Could it be the movie we’ve all been waiting for to watch at 3:00 am while eating a whole bag of pizza rolls?  Maybe.  But probably not.” She’s not wrong. In a lot of ways Lavalantula is no better or no worse than other subpar Syfy titles like Piranhaconda or Sharknado 3. I will contend, though, that despite the quality of the film, Guttenberg comes across as oddly likeable in Lavalantula. His role as a washed up actor who used star in 80s dreck like Clown Cops (poking obvious fun at Police Academy) and nonexistent superhero movies like Red Rocket (a SuperGutte movie could actually be fun, now that I think about it), is a pretty amusing exercise in self-deprecating humor, especially considering exactly how washed up you have to be to star in a move about volcano-born spiders that drool lava & spit fireballs in the first place. Extended cameos from people like That Red Headed Kid From The Sandlot (Patrcik Renna, who looks more or less exactly the same as he did 20 years ago) & The Guy Who Does the Voices in Police Academy (Michael Winslow) only hammer the point home how far The Gutte has fallen. Yet, you can tell Guttenberg is having a blast poking fun at himself & his reputation.

The idea of fire-breathing spiders getting ejected from a volcano is mildly amusing at first, but wears thin at a feature length, so what stands out most about Lavalantula is how effortlessly likeable Steve Guttenberg really is. At this point, I can easily sit through an entire Syfy Original stinker just to spend more time with the goof, which is something I never could have done comfortably in the past. In just five projects or so, my conversion to a Guttenberg fan is alarmingly thorough, complete. Now, all I have to do is hope that someone out there is willing to put these odder, dare I say loveable aspects to his personality & range to good use on a worthwhile project, preferably something that doesn’t tease a Sharknado crossover in a throwaway “gag” or curse The Gutte with the visual tolls of Hodgkin’s lymphoma. It could happen. It could!

For more on September’s Movie of the Month, 1990’s The Boyfriend School, check out our Swampchat discussion & last week’s comparison of the film to another horrific romance novelist romcom, 1989’s She-Devil.

8 thoughts on “The Guttenberg School or: How I Learned to Stop Worrying and Love The Gutte (in Just 5 Easy Steps)”