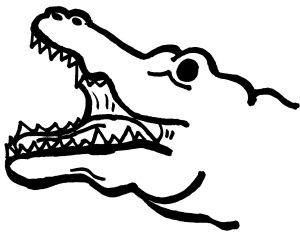 June’s Movie of the Month, Alligator, is an early 80s creature feature about a baby alligator named Ramón who grows mythically gigantic after being flushed down the toilet & feeding on a cruel science experiment’s cast-off corpses of animal subjects he finds in the Chicago sewers. Ramón is a fascinating monster in many ways. He not only embodies the urban legend of alligators living out of place in the sewer systems of major American cities; he’s also the size of a dinosaur and has an uncanny ability to hunt down & exact revenge upon the heartless people who’ve wronged him & other discarded animals. Still yet, one of the strangest aspects of Alligator‘s titular monster is that he’s indicated to be named after the little known, late painter Ramón Santiago. How or why that association between the gator & the painter was made is a total mystery.

Britnee wrote in our Swampchat discussion on Alligator, “During the scenes in David’s apartment, there are prints on the wall by Ramón Santiago (obvious inspiration for the alligator’s name). I was unaware of Santiago’s work prior to noticing the prints in the film, and I have to say that this guy has some phenomenal art. […] According to Santiago’s website, he stated, ‘My paintings are what dreams are made of.’ I would say that’s a pretty accurate description of his work. Unfortunately, I haven’t stumbled across an Santiago gator paintings yet.” Indeed, Google search results for “Ramón Santiago alligator” don’t lead any Santiago depictions of gators or even any discussions of the 1980 horror film in question (except for our own). At what point, exactly, was Santiago brought in as inspiration for our reptilian antihero Ramón? The artist could theoretically have served as a point of inspiration for director Lewis Teague or screenwriter John Sayles, but he could just as easily have been brought in as a sly visual joke by the set designer. There’s not a lot of evidence or context to point this connection in any solid direction.

Although there are no Santiago paintings of gators we were able to hunt down & the artist’s unlikely inclusion in the film might’ve been a question of set design or clever prop, it’s easy to see how his work fits into the Alligator universe on a very basic aesthetic level. Santiago’s work is dark & brooding, the exact same muted & grimy color palette of the gator Ramón’s urban environment. There’s also a magician’s touch to the painter’s work that is simultaneously a little corny & vastly mysterious, a combo of sentiments I could also assign to the gator Ramón’s artistry: chomping people to bits for crimes against animalia. The two Ramóns, painter & gator, are artists who largely go unrecognized for their accomplishments (pretty pictures & spectacular violence, respectfully). At first glance their work can appear a little common or even silly, but there’s a dark, mysterious soul lurking underneath he surface in both cases that makes them oddly fascinating in an unexpected way.

Until the greater mystery of the two Ramón’s true connection (if any truly exists) is cracked, here are a few of their works juxtaposed for your own consideration. 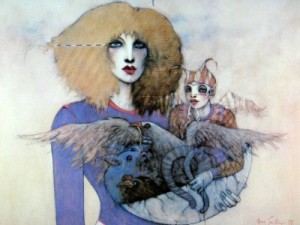 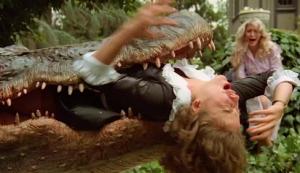 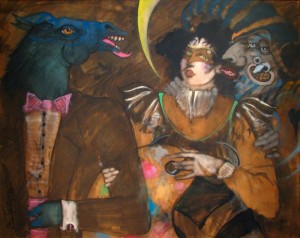 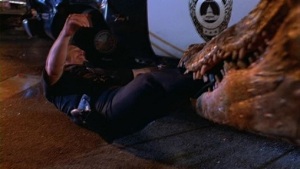 For more on June’s Movie of the Month, the 1980 creature feature Alligator, check out our Swampchat discussion of the film.