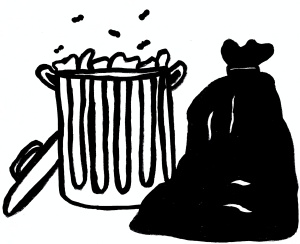 The almighty Divine is John Waters’s most infamous collaborator (even if that means her name is unfortunately synonymous with eating dog shit in a broad cultural context). Mary Vivian Pierce is the only Dreamlander (as Waters’s recurring cast is often known) to appear in every one of the director’s features. Mink Stole is, perhaps, the coolest kid in the room, the one with the most adaptable talent & willingness to commit. There’s an argument to be made, however, that Baltimore personality Edith Massey was Waters’s most readily fascinating featured player, his most consistently striking & bizarre screen presence. There’s no one else in all of cinema quite like Massey. The only actor who even comes close is Waters’s idol Russ Meyer’s frequent collaborator Princess Livingston (not surprisingly, the two women were discovered while working as a bartender & a motel manager, not as actors), but even Livingston’s bizarre charisma couldn’t quite match the weird energy & depth of content Massey brought to the screen in her decade-long stint as a Dreamlander. Massey’s odd, snaggle-toothed visage helped define who John Waters is as a filmmaker with a striking, idiosyncratic specificity that makes him my favorite living artist, if not person.

A lot of the shock value humor of Waters’s early, transgressive films often outshines the more even-tempered work he delivered later on in his “mainstream” titles like Hairspray, Cry-Baby, and (the utterly perfect) Serial Mom. Waters is often misunderstood in the context of shock cinema due to his earliest provocations, most notably Pink Flamingos, and the weirder trash-art surreality of his work is sometimes overlooked because of his youthful pranksterism. Massey was with Waters from day one during these formative provocations, putting in the bulk of her work as an actor in the director’s so-called “Trash Trilogy.” Easily, Massey’s most iconic role is her turn as Divine’s mother, The Egg Lady, in the aforementioned Pink Flamingos. The Egg Lady was an underwear-clad humanoid who demanded a constant supply of eggs at all times of the day: a strange, unsettling image that afforded Massey a lifetime of celebrity & provided the name of her short-lived punk band Edie & the Eggs. Massey’s screentime & command of Waters’s strange brand of humor grew in her two subsequent roles as villains in Desperate Living & Female Trouble (two films that are far more attention-worthy than Pink Flamingos, as much as I adore that scrappy filth fest). Massey devours scenery in these two wicked roles, whether she’s coaching her beloved nephew on the lifestyle benefits of “turning queer” or sentencing an entire village to death before her royal firing squad. Much like Waters’s overall aesthetic, however, I’m not convinced that Massey’s work reached its pinnacle in the wild, punk days of the “Trash Trilogy”. Her work wouldn’t meet its peak absurdity until it was juxtaposed against the much more mundane avenues of suburban America (and because we’re talking Waters here, I guess that specifically means suburban Baltimore).

The film that bridged these two halves of John Waters’s career, the trashy & the suburban-surreal, was his 1981 feature Polyester. Presenting Douglas Sirk by way of Russ Meyer, Polyester is a wonderfully strange slice of American pie, one molded & poisoned by melodramatic fits of adultery, alcoholism, teenage delinquency, and sexual perversion. Both halves of Waters’s career have endless merit in my eternally gushing eyes & it’s wonderful to watch the way Polyester can teeter totter on both sides of that divide without ever losing track of what makes either half special. Additionally, this is where I find Edith Massey’s most outrageous, knee-slappingly funny performance to be. Massey’s performance as Cuddles Kovinsky is her finest work as a Dreamlander, a true tour de force of delightfully terrible acting that somehow steals a film from a top-of-her-game Divine, which is no small feat. Watching Massey do her weird, off-putting thing in films like Pink Flamingos & Desperate Living is one thing, but her transgressive screen presence made total sense in the context of those films’ early punk depravity. In Polyester, she’s presented as a normal human being, an upstanding member of regular society, and it’s an outrageously ill-fitting role for a foul-mouthed, snaggle-toothed bartender with her braying style of line delivery to fill. Waters & Massey both knew exactly what they were doing when they airdropped Cuddles Kovinsky into an unsuspecting suburbia and it ended up being both a pivotal turning point in Waters’s trajectory as a filmmaker as well as the pinnacle of Massey’s work as a Dreamlander. Unfortunately, it would also prove to be their final collaboration due to Massey’s escalating health problems and inevitable death.

Cuddles Kovinsky is a wealthy heiress & former housekeeper of Divine’s much put-upon housewife archetype Francine Fishpaw. As Francine’s life spins out of control due to her teenage children’s hedonism & her husband’s flagrant adultery, Cuddles’s own path hits a rags to riches upswing. Cuddles lives the lavish fantasy of the nouveau riche, traveling around Baltimore in a limousine with a boy toy European driver behind the wheel, shopping for fashion’s high end designer finery (none of which looks at all natural or comfortable on her weird, little egg-shaped body), rubbing elbows with Baltimore’s country club elite, and just straight up murdering the French language with a never-ending recital of high society clichés & platitudes. Cuddles is the ever-optimistic ying to Francine’s depressive, alcoholic yang and Massey plays her with the exact right tone of complete obliviousness. When Francine passes out on the floor blind drunk her best friend Cuddles mews, “You’re so cute when you’re tipsy!” When Francine attempts to hang herself to end the pain, Cuddles exclaims, “We’re going on a picnic!” Polyester is mostly centered on Francine’s struggle to find happiness in a world where its existence seems unlikely at best, but Cuddles is perfectly happy throughout, concerned only with what she’s going to wear to her debutante ball at the country club. Divine & Massey’s performances compliment each other nicely, but it’s near impossible to take your eyes off Cuddles anytime she graces the screen. Even her over-the-top pantomime reactions to every syllable of someone else’s lines are attention-grabbing in a completely absurd, living cartoon kind of way. Of all of Massey’s wonderfully weird onscreen creations, Cuddles stands out as her most arrestingly unique & distinctly out of place.

I don’t mean to downplay the early works of either Waters or Massey here. The “Trash Trilogy” is pure cinematic chaos, a hedonistic whirlwind of freaks & weirdos I don’t know where I’d be without. I love each of those films & Massey’s performances in them dearly. With Polyester, however, the degenerate duo (with the help of Divine & other Dreamlanders, of course) struck upon something much more subversive. Watching Massey don leather dominatrix gear or wax poetic about the virtues of cocksuckers fit in very closely with what you’d expect from her image & her gaudy barroom personality. There’s something much stranger & more unexpected going on with Cuddles Kovinsky, a character that allows Massey to wear French schoolgirl & horse riding outfits and bray lines like, “There must be a God. Everything is so beautiful!” It’s all too easy to picture Massey fronting a punk band or tending bar, but gleefully praising God & enjoying a picnic in the woods? That’s some weirdly subversive shit. Waters capitalized on that taking-the-circus-to-suburbia aesthetic more or less for the remainder of his career, but unfortunately Massey wasn’t able to come along for the ride. Polyester ended up being Waters’s final collaboration with the actor and after a role in the forgotten schlock title Mutants in Paradise, she died. At least we can say her career as a Dreamlander ended on top, though, as Cuddles Kovinsky brought some of her weirdest, most unexpected energy to the silver screen, helping reshape the trajectory The Pope of Trash’s career would take in the decades to follow. At least we’ll always have Cuddles

6 thoughts on “Cuddles Kovinsky as the Ultimate Edith Massey Performance”