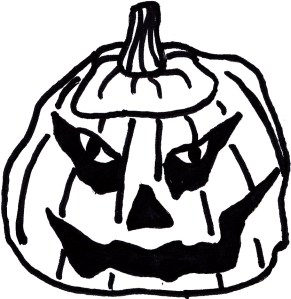 I’ve gotten to the point in my recent Matt Farley obsession where the only movies I’ve watched in the past week have been Motern Media productions. As I slip further & further into his back catalog of microbudget genre films, it’s getting difficult to remember a time where I wasn’t hanging around the kitchens, backyards, and nondescript shopping districts of New England nowhere with Farley and his recurring cast of friends & collaborators. The initial joy I found in the weirdly wholesome titles Monsters, Marriage, and Murder in Manchvegas and Don’t Let the Riverbeast Get You! did drop slightly when I got to Farley’s “first” signature film, however. Freaky Farley is often reported to be the very first Matt Farley production, but it’s the third title listed in his IMDb credits and Farley himself includes links to two full-length features on YouTube that predate even those (and YouTube) on his own website. It does in some ways feel like an Official Debut, though, one where Farley & friends graduate from staging prankish, small-scale comedies on MiniDV camcorder footage to making a “real,” film fest-ready movie. It also feels like the debut of a since-solidified formula that Farley hadn’t quite yet perfected, just barely missing the sweet-spot of what makes his later works so idiosyncratically enjoyable. Manchvegas & Riverbeast are “horror” movies that do not care about delivering horror, instead functioning as absurdly wholesome hangout films that are occasionally interrupted by monsters & crazed killers. That’s what make them so fun & distinct in comparison with other no-budget “backyard” horror movies, which tend to lean into nastiness & gore in an attempt to transcend their limited means. In that tradition, Freaky Farley is closer to a true horror film, one that does not skimp on blood or kills, which exactly what makes it notably less special than the Motern Media productions that immediately followed.

That’s not to say that Freaky Farley is any less silly than a standard Matt Farley picture. This is a deeply silly movie. Farley stars as the titular killer (duh), a peeping tom who gradually graduates to murderous mayhem. Imprisoned in a mental institution, Farley teases an interviewer (and the audience) with his full backstory, sneering, “You want to figure out how my sick mind works.” The details are absurd, as you might expect, painting a picture of a child driven mad by his overbearing father (Kevin McGee, perhaps Farley’s most committed recurring player; certainly his most muscly), who forces him to pointlessly dig & refill the same backyard hole in perpetuity as punishment for various slights. The repetition of this . . . abuse? drives Farley mad until he becomes widely recognized as a laughable kook, on par with the local witch, the local ninja, and the local “bearded hobo.” His unseemly behavior begins with spying on women through their uncurtained windows as they undress, typical peeping tom behavior. It then graduates to full-on murder spree once his weirdly muscly father pushes him over the edge, devolving the back half of the film into stage blood mayhem that feels jarringly incongruous with Farley’s larger catalog. A series of violent stabbings with a pumpkin carving tool does seem totally at home with the microbudget slasher genre Farley & co. are parodying (or paying homage to, depending on how their tone hits you). However, it feels entirely foreign to the wholesome hangout pictures that would immediately follow in the Farley oeuvre, where murders are a genre inconvenience that get in the way of his oeuvre’s true joys: flatly delivered, overwritten dialogue & novelty song dance parties. What interrupts these murders does feel in-line with Farley’s later works, though; moss-covered woodland monsters called Trogs. Just like the Gospercaps & Riverbeasts that followed in the next two pictures, the Trogs are cheaply costumed beasts that tie the whole picture together in a delightfully inane spectacle, saving Freaky Farley from its own nastier impulses.

The one major advancement Freaky Farley introduced to the Motern Media filmography was a jump from DV camcorder technology to actual 16mm film. The grime & grain of late 70s microbudget slashers is more convincingly staged in this format, especially in sunlit natural environments, pushing Freaky Farley visually closer to the Sleepaway Camp & Friday the 13th sequels territory it reflects in its atypically violent tone. That 16mm visual aesthetic was later put to much better use in Monsters, Marriage, and Murder in Manchvegas, however, where its 70s slasher grime was tempered with the tone of a summer camp slideshow depicting good natured, harmless pranks. It’s that exact good-natured harmlessness that’s missing from Freaky Farley. Without it, the movie feels a little too close in tone with the microbudget horror genre it’s spoofing/lauding. There are still plenty of Farley-specific touches to enjoy here despite that more familiar tone, however. Flatly delivered lines like “I’m suddenly quite ashamed of my nakedness” & “All guys are suckers for a girl in a witch costume” hang in the air with pitch-perfect awkwardness. Similarly, the final cut of each scene drags on just a beat or two longer than it should, subtly affording the film a kind of Tim & Eric anti-humor without fully tipping its hand. Although Farley’s signature novelty songs are sadly infrequent here, there’s an excellent plot-summarizing ballad played over the end credits that make up for some of that lost time. Farley also seems to be genuinely wrestling with condescending parental sentiments like “It’s okay to have dreams, but better to have a regular paycheck” in the film, which offers an interesting self-reflection on his life’s work of making backyard movies about witches, ninjas, and trogs with consistently underwhelming success. I just don’t see much here that wasn’t substantially improved in his next production, Manchvegas, making Freaky Farley one for the Motern Media die-hards only. If you’re new to the Motern catalog, it’s better to instead watch the sweeter, more distinct picture from his two-film 16mm era, the one that immediately followed.