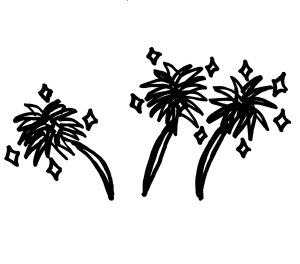 It’s always interesting what international media does or does not culturally translate in its voyage to America. The animated supernatural romance Your Name., for instance, seems like it should have been a massive crossover hit in the US, but it barely made a splash. The top-selling anime film of all time, Your Name. expertly plucked lovelorn teens’ heartstrings to a gorgeous visual palette and emo mall punk soundtrack, inspiring so many repeat visits to the theater in its target demographic that it became an instant cultural phenomenon. That phenomenon translated to a mere faint whimper in its US release, however, where the movie quickly died in near-empty theaters (despite being one of last year’s best domestic releases in my estimation). Meanwhile, in Japan, Your Name. was so successful that it’s already inspired a wave of pale imitators. Advertised as being “from the producers of Your Name.,” Fireworks (full title: Fireworks – Should We See It from the Side or the Bottom?) is another animated teen romance that filters low stakes emotional crises through a high stakes supernatural plot. With a reliance on cheap commuter animation to fill in its gaps and a ludicrous story that barely holds itself together in any intelligible way, it’s clear that Fireworks was rushed to market to capitalize on Your Name.’s (Japanese market) success as quickly as possible, quality be damned. It can’t help but open itself up to direct comparison because of that lineage, a side-by-side that is unforgiving to Fireworks’s lack of emotional depth, intelligent construction, and genuine beauty. Even so, the film is mildly enjoyable as a novelty, a quirky footnote to Your Name.’s instantaneous legacy (outside the USA).

Two teen boys long for the love of the same troubled classmate, who has just learned that she’ll be moving away to a different town at the end of the school year. Unbeknownst to the boys who carry a torch for her, she plans to escape her fate by running away on the next train to Tokyo with one of her would-be suitors in tow for company. She decides the lucky victor based on a swimming pool race, which is treated in-film as the single most significant athletic event of all time. After the two teens pair off for a date at the town’s celebratory fireworks display, the left-behind, heartbroken third makes a wish on a magical orb that the swimming match had gone differently. If this is all sounds absurdly melodramatic, it’s because it very much is. There might be something to how teenage crushes are treated in Fireworks the way they feel in real life: like the biggest deal in the world, a monumental flood of lust & embarrassment. For the most part, though, the characters’ heightened earnestness over minor social exchanges feels entirely inhuman & absurd. It’s a good thing, then, that most of the runtime distracts itself with the supernatural machinations of the wish-granting orb, which the teens use to keep resetting their young-love predicament until the right couple can successfully escape fate & run away to happiness. The more they reset the loop of their fateful swimming race & fireworks date, however, the further their version of reality slips away from the physical world we know, allowing the animators to play around with surreal, computer-smoothed fantasy-scapes overloaded with underwater distortions, golden adornments, and abstracted fireworks.

There is one thing Fireworks gets exactly right about human behavior: teenagers are grotesque, horned-up idiots (I can confirm this because I used to be one myself). As much as the kids of Fireworks might feel like over-the-top caricatures in moments when they’re frozen motionless by the slightest confrontation with social anxiety, they feel entirely real in the stretches of juvenile dialogue when they’re cracking poop jokes, drooling over teachers’ breasts, and having relentless, inane arguments about whether fireworks appear round or flat when they explode (a topic that repeats so often it’s included in the film’s long-title). Besides its bastardization of Your Name.’s basic formula, most of Fireworks’s novelty lies in the juxtaposition of its beautifully cheesy, heavenly screensaver imagery and its central subject of grotesque teenage horniness disguising itself as romance. Your Name. generated a deep well of empathy, curiosity, and genuine beauty that convinced audiences its central romance was powerful enough to supernaturally break through the barriers of space & time. When the shit & tits-obsessed knuckleheads of Fireworks attempt the same romantic transcendence (with the help of a fireworks display and a magical orb) the sentiment plays like a bizarre joke. It’s charming in its own way, though, if not only for its very existence as a mockbuster version of a much better film that, at best, barely has earned a cult status in the U.S. If Your Name. failed to translate to American audiences in all its transcendent beauty, it’s difficult to imagine this rushed-to-market frivolity faring much better. Even more dedicated anime nerds will likely struggle with finding much value in its mediocre charms as an occasionally beautiful, relentlessly cheesy, oddly grotesque teen melodrama. I (mostly) got a kick out of it, though, as it helped further illustrate what makes its more substantial predecessor so goddamn great.