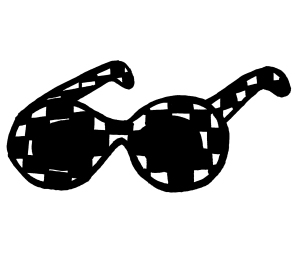 In her documentary Confessions of a Suburban Girl, director Susan Seidelman examines the Patriarchal social conditioning she and her peers were hindered with as teens in 1960s suburbia. Trained from birth to be dutiful housewives safely tucked away from the dangers of The Big City where their husbands would work, these girls were “protected” to the point of suffocation. It’s no surprise, then, that Seidelman and her frustrated buds idolized the “Bad Girls” of their community: the leather jacket-wearing, go-go dancing, sexually adventurous reprobates that were meant to be serve as cautionary tales but instead registered as heroes who bested the system. You can easily detect this fascination with the defiant Bad Girl archetype in both of Seidelman’s first two features as a director. In her debut (and our current Movie of the Month), the 1982 No Wave drama Smithereens, Seidelman takes us on a grimy, dispirited tour of post-punk NYC under the guidance of Wren (played by Susan Berman) – a selfish, cunning brat who will exploit anyone in her orbit if it means surviving another day. Smithereens is a fascinating character study of a desperate Bad Girl who’s running low on resources to keep her deviant, starving-artist lifestyle going, to the point where she threatens to abandon audience sympathies entirely with each new grift. Wren is more of an anti-hero (as well as her own antagonist) in that way. For a truly heroic portrait of a Bad Girl from the Big City, you’d have to look to Seidelman’s big studio follow-up to Smithereens: Desperately Seeking Susan.

None other than 80s (and 90s & 00s) pop icon Madonna stars as the titular Bad Girl in Siedelman’s second feature – a character who’s infinitely cooler & more lovable than the prickly, survival-minded Wren. Susan represents a fantasy of what a bohemian life in the Big City would look like to a sheltered woman from the suburbs in desperate need of adventure & romance. Roseanne Arquette costars as the audience surrogate: a terminally bored, milquetoast housewife who looks to Bad Girls like Susan as escapist wish-fulfillment fantasies. After stalking this strange woman through her personals ads in newspapers, our protagonist finds herself trailing Susan in real life as well. She leaves the sheltered safety of the suburbs to follow Susan around NYC like a cartoon character floating behind the steam trail of a cooling pie, totally mesmerized. This fascination is clearly more about envy than desire, and the movie-magic fantasy of the picture is a traditionally farcical mix-up of concussions, misunderstandings, and mistaken identities wherein the two women swap lives for a short, wacky time. In Smithereens, Seidelman fixates on the harsher realities of what Bad Girls from the Big City would have to do to scrape by since her freedoms require a life without safety nets. Desperately Seeking Susan is more about the romantic fantasy of that lifestyle as seen from an outsider’s perspective, something she and her peers shared as sheltered teens. In both instances, a life of suburban doldrums is effectively framed as a prison sentence in contrast to the daily struggles of a Big City free-spirit who answers to no one – except when she’s negotiating a place to sleep that night.

Desperately Seeking Susan is decidedly less punk & less challenging than Seidelman’s No Wave debut, but it’s still just as interested in the lives of frustrated, bored women in search of a life worth living. Both films work exceedingly well as a guided tour of 1980s NYC and as period-specific fashion lookbooks. That latter concern may be the only area where Susan truly outshines Wren. Every single outfit Madonna wears in Desperately Seeking Susan is impossibly perfect, and most of the excitement of the picture is in the suspense of what she (or the concussed woman who mistakenly believes she is her) is going to wear next. Wren’s tour of a post-punk NYC is a little more useful from a street-level documentarian standpoint, but Susan’s adventures in the city do happen to touch on some gorgeous dive bar & thrift store locales, as well as an insanely dense list of soon-to-be-somebody personalities of the era: Laurie Metcalf, John Turturro, Ann Magnuson, Steven Wright, The Honeymoon Killers’s Shirley Stoller, the triplets from Three Identical Strangers, etc. etc. etc. Seidelman invites this 1:1 comparison between Wren & Susan in the very first scene of the film, where Madonna is introduced taking selfies with a Polaroid camera in a direct echo of one of Smithereens’s most iconic scenes. Whereas Smithereens is a bummed-out reality check of what the Bad Girl lifestyle means for people who have no choice but to live it, though, Desperately Seeking Susan is a “The clothes make the woman” fantasy where being a Bad Girl only means liberation from a life of dutiful housework & childrearing. Both perspectives are valid, and both are made more valuable when considered in tandem.

For more on August’s Movie of the Month, the No Wave summer-bummer drama Smithereens (1982), check out our Swampchat discussion of the film and last week’s look at the director’s suburban beginnings before moving to the big city.