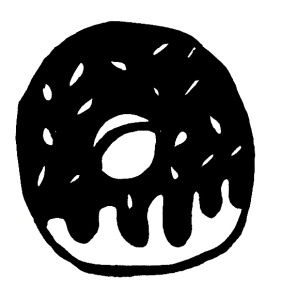 The Gen-X vampire slacker drama Blood & Donuts, our current Movie of the Month, carries a lot of low-key hangout energy for a movie about a bloodsucking immortal ghoul. The film’s central vampire, Boya, is reluctant about his role as an eternal seducer & killer, appearing to be genuinely pained by the danger he poses to the vulnerable humans around him. He attempts to limit his sanguine footprint by feeding off street rats and avoiding eye contact with potential romantic partners, until the urge overpowers him or until his vampirism proves useful in saving the day for his mortal friends. One of the ways this small-budget Canuxploitation horror signals this low-key, anti-violence hangout ethos is by setting its story in a 24-hour donut shop, where Boya can hang out in wholesome solidarity with other nocturnal weirdos without frequenting the orgiastic goth nightclubs more typical to vampire cinema. That donut shop is a quirky choice that maybe suggests a livelier horror comedy than Blood & Donuts cares to deliver, but it still helps distinguish the otherwise tempered film as a singular novelty (which can only be a boon in the crowded field of vampire media).

While vampire movies are a dime a dozen, donut shop movies are more of a niche rarity. There are certainly iconic donut shops to be found scattered around pop culture –Big Donut in Steven Universe, Miss Donuts in Boogie Nights, Stan Mikita’s Donuts in Wayne’s World, Krispy Kreme in Power Rangers, etc. However, those settings are isolated diversions rather than serving as a central location like the one in Blood & Donuts. The only other significant feature film I can think of with a plot that revolves so closely around a donut shop is Sean Baker’s 2015 Los Angeles Christmas-chaos piece Tangerine, which is anchored to a real-life LA donut shop called Donut Time. The opening credits of Tangerine scroll over a yellow enamel table at Donut Time, scratched with the names of bored vandals who have visited over the years. The movie serves as a kind of whirlwind feet-on-the-ground tour of a very niche corner of LA, but it’s anchored to Donut Time as a significant landmark to establish a sense of order amidst that chaos. It opens there with its two stars (Mya Taylor & Kitana Kiki Rodriguez) splitting a single donut because they’re perilously cash-strapped. It also climaxes there in a classic Greek stage drama confrontation between all the film’s major players in a single, donut-decorated location that explodes the various hustles & schemes they’ve been struggling to keep under control throughout. Both Blood & Donuts and Tangerine wander off from their donut shops to explore the city outside (Toronto & Los Angeles, respectively), but their shared novelty locale provides the structure that allows for that indulgence

Like how Boya (Gordon Currie) awakens from a decades-long slumber at the start of Blood & Donuts, the similarly dormant Sindee (Rodriguez) emerges from prison at the start of Tangerine out of the loop on what’s been happening in her local trans sex worker microcosm since she’s been away. Over the opening shared donut, she learns from her best friend Alexandra (Taylor) that her boyfriend/pimp Chester (James Ransone) has been cheating on her while she was locked up, so she bursts out of Donut Time into the Los Angeles sunshine to enact her revenge on all parties involved. Obviously, this flood of Los Angeles sunlight distinguishes Tangerine from the late-night vampire drama of Blood & Donuts (as well as distinguishing Baker’s film as a kind of novelty within its own Christmas movie genre). Otherwise, though, the two films have a similar way of collecting oddball characters in low-income-level gathering spots—like, for instance, donut shops. Tangerine speeds through a blur of 7/11s, laundromats, dive bars, by-the-hour motels, and car washes until it finds its way back to its Donut Time starting point. It finds an unexpected symmetry within the low-rent late-night locales of Blood & Donuts’s own tour of Toronto, something that’s most readily recognizable in the films’ respective visions of impossibly filthy motel rooms. Or maybe it’s most recognizable in how David Cronenberg’s mobster runs his crime ring out of a bowling alley, while the pimp antagonist of Tangerine runs his own out of a donut shop.

You’d think that a nocturnal vampire comedy from the 90s and a sunlit 2010s trans sex worker drama would have very little in common, especially since the former is so lackadaisical and the latter is commanded by high-energy chaos. Their shared donut shops locales and commitment to exploring the character quirks of the weirdos who frequent them bridge that gap with gusto. The word “donut” may not appear in Tangerine’s title the way it does with its Gen-X predecessor, but the film is just as committed to accentuating the novelty of its central location. Despite being far too young to reasonably remember the TV commercial she’s referencing, Sindee announces, “Time to make the donuts, bitch!” to her romantic rival as they approach the climactic showdown. She also jokingly asks the Donut Time counter girl, “Do you have watermelon flavor?,” an echo of Blood & Donuts’s own bizarre inclusion of a kiwi-flavored donut. As a pair, the two films seem to be serving as two pillars of a sparsely populated Donut Movie subgenre. The longer you scrutinize how they use the novelty of that locale the more they appear to have in common despite their drastically different surface details.

For more on September’s Movie of the Month, the Gen-X Canuxploitation vampire drama Blood & Donuts (1995), check out our Swampchat discussion of the film.