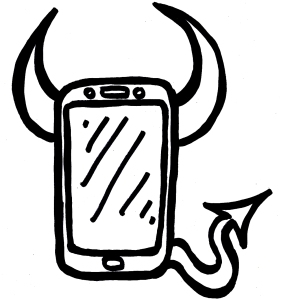 My eternal amusement with the Killer Internet gimmick in modern horror bows to no one else’s. A few brave souls will stick out their necks for the Skype horror gimmick of Unfriended, the chatroom horror gimmick of Cam, and the Pokémon Go horror gimmick of Nerve, but it takes an even sturdier love of the genre to appreciate the really trashy shit: the Snapchat horrors of Sickhouse & Truth or Dare?, the Facebook timeline horrors of Friend Request, the Candy Crush nightmare of #horror, etc. This is my cinematic junk food – my personal version of the straight-to-Netflix romcom or the Adam Sandler yuck-em-up. I do believe the Killer Internet genre has an inherent value as a cultural time capsule just as much as it does as mindless entrainment, though, especially when it’s at its least discerning. This genre is doing more to preserve what our daily lives online look & feel like than any respectable Prestige Drama would dare; its assumed frivolity as an instantly dated novelty will only prove more academically useful with time, as these films are essentially archiving our cultural experience with modern user interface tech. Enter the killer-smartphone-app thriller Countdown: another silly-ass technophobic horror specimen to add on top of this cursed data pile, and another excuse for me to go to bat for a genre no one else seems to value as much as we all should.

The online ghoul-du-jour in Countdown is a demon who haunts a free smartphone app. This titular app is a countdown clock that tells you exactly how long you have left to live, which could be 60 years or 60 hours, depending on your pre-determined fate. Unremarkable archetype characters download the app in groups at parties & workplace breakrooms, having a laugh at the arbitrary estimation of how much time they have left alive on Earth. Only, the countdown clock proves to be eerily accurate, which isn’t so funny for the unfortunate souls who happen to download it the very night they’re fated to die. Armed with this cosmically privileged information on their impending doom, they naturally attempt to avoid their fate in a myriad of futile schemes: changing their travel pans to avoid train wrecks & car crashes, hacking into the app’s code to add time to their ticking clocks, commissioning a priest to wage battle with the dark forces that haunt their phones, etc. Unfortunately, these half-cooked maneuvers only serve to summon an ancient demon who strikes them down at their exact predetermined time of death anyway. Bummer. Between the hospital setting & college campus environment its main “character” frequents and the inevitability of fated Death that haunts her, there’s nothing especially new to Countdown that you won’t find done better in the Happy Death Day or Final Destination franchises. Its only value is its novelty as an entry in the Evil Internet canon, then, which it contributes to in a few key ways.

Countdown’s central gimmick obviously exaggerates the uncertainty of downloading an untrustworthy app to your phone, not knowing what viruses may accompany it to threaten your data security (and, apparently, your life). It doesn’t help that the app somehow has a 3.6 approval rating despite literally murdering people, so you can’t event trust its user feedback. Worse yet, once downloaded it will not allow you to uninstall it from your device, nor can you mute its notifications. For an unsavvy luddite like myself, there’s a unique menace to not being able to mute the loud, horrific noises that come out of my evil, dumb phone – settings that seemingly revert back to their top-volume horror with every automatic app update. I’ve never seen such a relatable mundane horror from my daily life represented onscreen. Most importantly, Countdown hinges its demonic smartphone possession premise on the eerie unknown realm of User Agreement text – the Terms & Conditions scroll that no one ever reads, to the point where we’re giving strange malevolent forces free rein over our personal data so that we can share cutesy memes about Millennial ennui or whatever. Every single character who downloads the Countdown app is explicitly agreeing to being hunted down by the Countdown demon, which they do automatically without pause. If that’s not the most universally relatable shit that could be exploited in horror, it’s only because you’ve never added an unnecessary app to your smartphone. I commend you for that; you’re are much stronger willed than I am.

There’s a lot about this movie that feels half-cooked: a #metoo subplot that’s not taken seriously enough to justify its discomfort; a PG-13 level body count that’s not brutal enough to overpower the skeptical hurdle most audiences will have with this silly of a premise; the sub-gimmick of a car backup cam jumpscare, which really deserves its own feature lengthy movie (that apparently only I will enjoy). Still, as the only mainstream, over-the-plate horror move tossed into wide release the week of Halloween, I very much appreciate that Countdown found new ways to expand the boundaries of the Killer Internet genre by documenting & exploiting the most mundane annoyances of daily smartphone app use. Cinema is an excellent way for us to record & reflect the full spectrum of the human experience, and we’re very unlikely to ever see an Oscar Bait drama handle topics as pedestrian as unmutable app notifications, unreadable user agreement text, and untrustworthy app store review ratings. That work, documenting the real nitty gritty of daily life in the 2010s, is left to noble trash like Countdown.