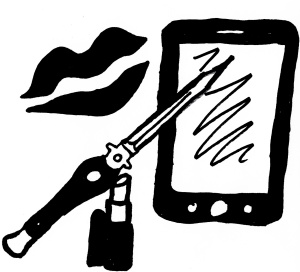 There are two competing gimmicks at war with each other in the gleefully idiotic trash-horror Truth or Dare?. As suggested in the title, one gimmick involves a supernatural, deadly version of the schoolyard game truth-or-dare that drives the film both to explorations of contrived ethical dilemmas and to even more contrived novelty indulgences in demonic possession clichés. As delightfully silly as a haunted truth-or-dare game is for a horror movie premise, though, it’s not the gimmick that most endeared the film to me. It’s Truth or Dare?’s stylistic gimmick as The Snapchat Filter Horror Movie that really stole my trash-gobbling heart. Whenever demonically possessed participants prompt contestants in the titular game to answer “Truth or dare?” their faces are altered with cheap digital effects to display a sinister, impossible grin. It’s a design that unmistakably resembles a Snapchat filter, which is explicitly acknowledged in the dialogue when a character reports, “It looked like a messed-up Snapchat filter.” I’ve already exhaustively stressed in the past how important high-concept/low-budget horrors about the evils of the Internet are for being willing to document what modern life online looks & feels like in a way that classier productions would tend to avoid. Films like Unfriended, #horror, Afflicted, and so on are doing more to preserve the history of modern online communication than they’re given credit for, specifically because they’re willing to exploit pedestrian trash mediums like Skype, Candy Crush, and webcasting as foundational gimmicks for feature-length narratives. For its own part, Truth or Dare? has earned its place in cheap horror’s academic documentation of online discourse by exploiting Snapchat filter technology as a dirt-cheap scare delivery system. As silly as its titular gimmick can be, it wouldn’t have deserved camp cinema legacy without that secondary Snapchat filter gimmick backing it up.

It’s tempting to bail on enjoying Truth or Dare? in its initial setup & character introductions, which make for a very shaky first act. In an opening sequence so cliché it was parodied in The Cabin in the Woods a half-decade ago, a group of college age friends embark on their Last Spring Break Together and are met with a supernatural evil on the journey. Lured into a drunken, late-night round of truth-or-dare by a mysterious stranger in an even more mysterious abandoned Mexican church, the group is locked into a demonically-possessed version of the schoolyard game that follows them home and threatens their lives. Taking turns in several rounds, each character is challenged by hallucinations of the Snapchat Filter Demon into following through on truth-or-dare prompts or violently dying in refusal. Besides a closeted gay character and hilariously oblivious party bro (“I can’t say no to shots. Everybody knows that.”), none of these College Kid archetypes especially stand out as distinct individuals. They’re instead used as personality-free placeholders for the movie’s deployment in awkwardly staged moral dilemmas. The dares indicated by the film’s title are almost exclusively acts of lethal violence, but the real hook of the premise is in exposing the truth behind people’s desire to be seen as charitable & good. The demonic game of truth-or-dare forces characters to act out their unspoken desires and to confess their most shameful secrets in grand displays of public humiliation. The hidden selfishness of the self-righteous is a particular fixation of the game, as characters are challenged to back up statements like “I didn’t have a choice” or to prove claims that they’d sacrifice their own lives to save many strangers’. Honesty is the most highly valued virtue in Truth or Dare?’s worldview and it’s one the movie searches for in the most gleefully cruel ways possible.

Although the initial setup is a little labored (a probable side-effect of having five writers share one screenplay), Truth or Dare? gets exponentially more ludicrous (and, thus, fun) as its titular game escalates, ending on a surprisingly ambitious note with implications that are incredibly far-reaching & clever, considering the film’s lowly starting point. It’s possible to find more fully committed versions of the film’s central gimmicks in better works. The pitch-black exploitation comedy Cheap Thrills offers an even more cruel indulgence in depicting a series of violent dares gone out of hand. While Truth or Dare? verbally admits its Shapchat filter gimmick in the dialogue and adopts cell phone aspect ratios in its opening credits, it has nothing on the fully-committed Sickhouse, which is essentially a The Blair Witch Project remake staged through a series of Snapchat posts (and originally posted on the Snapchat app itself). Nerve might even be a better midpoint between the two gimmicks, where a series of escalating dares are filtered through the language of social media. The acting & character work in Truth or Dare? are aggressively bland. The music feels like faux-inspirational Chariots of Fire/allergy medicine commercial runoff. The PG-13 rating indicates both its potential for truly disturbing violence and its loyalty to genre cliché. On the Blumhouse scale, this film is more Happy Death Day than Get Out. On the Evil Internet horror scale, it’s more Friend Request than Unfriended. Still, its specificity as a Snapchat filter horror (as opposed to a Snapchat platform horror) distinguishes it from previous app-based schlock and its follow-through on the implications of its demonic truth-or-dare premise wholly makes up for its first act unease. If nothing else, I can report that the film’s ending is the most satisfying trash-horror resolution I’ve seen since the evil doll cheapie The Boy, a reference I intend as the highest of compliments (it did rank high on our collective Top Films of 2016 list, after all). Between leaving me on that high note and generating its terror through a disposable mode of online discourse, Truth or Dare? very easily endeared itself to me. I wish more people were having this much fun with it.