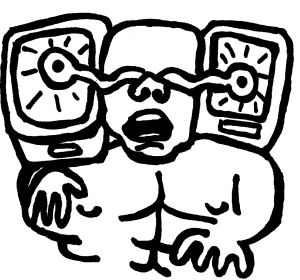 It’s becoming an annual routine for me to be captivated by some sexually menacing, cursed object that seemingly no one else in Film Nerd Land cares about. In the recent past, titles like The Wild Boys, Double Lover, and We Are the Flesh have triggered that ol’ Cronenberg feeling deep in my subconscious so that they’re all I want to talk about, despite being too alienating & gross to properly evangelize. Violence Voyager is my beloved Cronenbergian Nightmare of the Year in that respect, as it’s at once the most exciting and the most deeply uncomfortable film I’ve seen in ages, one I’m desperate to discuss with some like-minded freaks but feel hesitant to widely promote given its not-for-everyone discomforts. I won’t claim that it’s my favorite film of this cursed ilk, but it very well might be the most disturbing, as its peculiar brand of horror & sexuality involves the abuse of young children. More disturbing yet, the film feels as if it were made entirely by one loner-creep in some far-off basement, as if he were racing to publish his work before being raided by the authorities for crimes against society & good taste. It’s the rare work of modern outsider filmmaking that feels genuinely dangerous, with all the excitement & unease that descriptor implies.

In essence, Violence Voyager is a Cronenbergian puppet show. Sidestepping the financial time constraints of traditional animation, Japanese filmmaker Ujicha hand-operates 2D cutouts of illustrated characters against hand-painted backdrops. Their vintage illustration designs and seemingly hundreds of alternate poses means the work is neither lazy nor simplistic, but they’re still crudely animated & vocally dubbed to approximate an amateur backyard puppet show instead of a professional production. It feels as if a Henry Darger type had cut out characters from ancient board game boxes and recorded their imaginary interactions on VHS tapes that somehow made it into wide circulation. The genius of this technique is that it allows Ujicha to experiment with a mixed media approach that incorporates liquids, fire, smoke, and shadows. Just when you think you’ve gotten a grasp on what the movie is up to visually, the surprise intrusion of a seminal goo or firecracker “explosion” will knock you on your ass again. No matter how much effort artists like Jim Henson & Jan Švankmajer put into ensuring puppetry is taken seriously as adult entertainment in the past, the medium still inherently feels like it’s designed to attract children – an effect that Ujicha leans into with diabolical intent. Violence Voyager sometimes looks & sounds like cheap-o Saturday Morning television aimed directly at kids, but just one viewing could scar a child for life.

Plot-wise, Violence Voyager plays like an adaptation of a vintage choose-your-own-adventure novel or first-wave video game. A blonde American boy named Bobby is ostracized as a foreigner in his mountainside Japanese community, but has managed to make a few friends among the local children (and with a cat tamed Dereck). While getting into some Summertime Mischief in an isolated pocket of the mountain forest, Bobby and his BFFs stumble across a rundown amusement park named Violence Voyager. Admitted free of charge and armed with Super Soakers, they’re instructed to fire their “weapons” at an invading force of alien robots, which pop out of bushes at random in a kind of in-the-flesh video game. This embarrassingly dorky activity turns sinister as the amusement park quickly transforms into an escape room. Bobby discovers that he & his besties aren’t the only children who’ve been lured to the amusement park prison. Dozens of local children are being held hostage and turned into mutant abominations that eerily resemble the alien invaders of Violence Voyager lore. Grotesquely disfigured and forever psychologically scarred by his captors, Bobby must become the futuristic adventurer he only pretended to be when the stakes were fictional. The results of his heroism are more revolting than awe-inspiring, but it’s a noble effort all the same.

The biggest price at the door for enjoying this diabolical work is that you must be okay with seeing violence against children & animals simulated for your entertainment. As nasty as Ujicha’s visual creations can be, it helps tremendously that the acts of fantastic, unreal violence are crudely animated instead of pantomimed in live action. It does not at all help that the children are often nude. As far as the audience can tell, the Cronenbergian mutation experiments that drive the film’s plot do not involve any outright sexual abuse. However, the film stubbornly lingers on the imagery of naked child bodies in an uncomfortable way that pairs horrifically with the cheerful optimism of its vintage kids’ games aesthetic. Even before the true horror starts, the kids look oddly deformed & scarred – as if they had been raised near an unmentioned industrial dump. Later, we’re confronted with illustrations of their genitalia in mad scientist laboratory environments; the abusive implications of that juxtaposition crawls right under your skin regardless of whether it’s directly mentioned. I mean it both as a compliment and a warning that this film is reminiscent of Henry Darger’s work; it’s both a beautiful art object and a traumatic guided tour of some far-off sicko’s subconscious.

I don’t know that I can outright recommend Violence Voyager without feeling like a total scumbag, but I’d be a liar if I didn’t report that it’s one of my personal favorite discoveries of the year. If you’re looking for one of the most bizarre, brutal, psychologically disturbing visions of Hell that 2019 has to offer, look no further. Just be prepared to walk away wondering if the weirdo who made it is a potential sex criminal, or if you wound up on a government watchlist merely by renting it. It is one especially queasy slice of sleaze, which is apparently something I regularly crave.