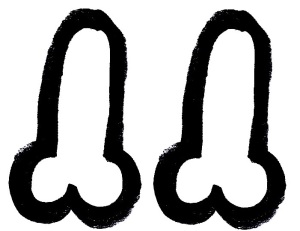 Aesthetically, Double Lover filters the pseudointellectual smut of the most illogical giallo pictures in existence through the color-muted, urban visual lens of Brian De Palma (who was already heavily influenced by giallo himself). De Palma’s clinically-applied split screens are abound throughout the picture, visually echoing the theme of twins & doubles just as much as its obsession with mirrors (seriously, it feels like over half of the runtime is framed through mirrored reflections). The visual provocations are blunt & unsubtle, humorously so. The film opens with an intense, medical closeup of a gynecological exam, then dissolves into a similarly-framed eye, directly referencing Georges Bataille. The protagonist picks up part-time work at an art museum, which allows for artistically framed photography of medical gore in a clinical but abstract setting, in an exhibit seemingly titled “BLOOD, FLESH, BLOOD, FLESH.” Like many gialli, the film often resembles a fashion shoot more than a horror movie, with almost any given frame practically being able to pass for a Vogue magazine cover (minus maybe the gore and the sex). Many audiences will dismiss this handsome, cold aesthetic as pretentious drivel, but there’s a dry humor to the film’s fashionable psychosexual madness. As our protagonist enters a staring contest with her cat mid-fucking, as the frame fills with a funhouse hall of mirrors at the climax, as each sinister sex dream reveals another layer of gleefully taboo desire, it’s clear the film is having fun with its over-the-top indulgences. It’s just doing so with a straight face.

I wouldn’t exactly call Double Lover an empty provocation. Its (well-founded) paranoia over men’s control & dismissal of women within the medical field is a legitimate strand of psychological terror with a rich history in the horror genre (and in real life). Its fretting over the power dynamics of a dominant (evil?) twin and their submissive (good?) twin is outdated psychobabble, but an interesting lens for viewing the power dynamics of romantic coupling in general. These themes are conspicuously present and exhaustively explored throughout, but it would be a lie to say they’re the film’s main draw. Double Lover is a blast because it shamelessly indulges in excess. Its shots of mirrored reflections persist long after the audience catches onto their significance. Its nightmare logic makes little attempt to justify its narrative trajectory outside the fun & the discomfort of its surprise. Its horror genre indulgences are entirely unconcerned with remaining highbrow, even risking its art film pedigree on a series of jump scares in the increasingly bonkers third act. Its external influences are blatantly displayed on the surface, with a reference to “steel gynecological instruments meant for torture” directly calling attention to its similarities with Dead Ringers within the opening ten minutes. Most importantly, though, its indulgences in onscreen, kinky sex are frequent, disturbing, and often genuinely erotic. Your comfort level with deliberate shock value provocation will likely steer your experience with the film overall, even though it’s far from the only factor at play.

Given Double Lover’s willingness to indulge in kink-minded titillation and its completely disinterest in subtlety, I should probably be more forgiving of its flippant comparisons to the Fifty Shades of Grey franchise. I have two major roadblocks preventing me form that accepting that, though. First, I’m deeply invested in the film being understood as a continued tradition within the dream logic surrealism of the horror genre, not just a throwback as an erotic thriller. More importantly, though, I want to single out Double Lover as being an exceptional example of my favorite type of filmmaking: Elevated Art Cinema™ techniques applied to trashy, genre-minded premises that typically aren’t afforded them. This movie is dumb, crass, exploitative, trope-laden, and more than a little silly. It’s also a gorgeous work of fine art that disarms its audience with its nonstop onslaught of inelegant indulgences as a means of crawling under their skin and rotting them from the inside. It’s so much more than a less tame Fifty Shades. Its kinks are just the surface of its bizarre sense of psychological menace, a deep well of oversexed paranoia & manicured evil. Double Lover is an over-indulgent, preposterous film and, paradoxically, a perfect one.