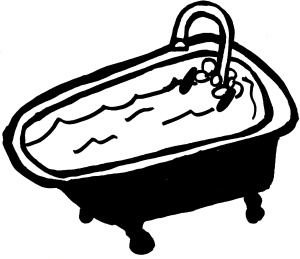 In the WWE there’s a little used, very illegal tactic of winning matches known as “twin magic“. This particular form of cheating occurs when wrestlers Brie & Nikki Bella swap places mid-match beyond the ref’s comically limited vision and use their identical twin likeness to win in a dire situation. It’s typical heel behavior, but also very specific to their sisterly gimmick (and also amusing because they barely look similar to one another at this point in time). I mention all this because the idea of “twin magic” exists far beyond the wrestling ring & the concept of confusing twin identities. “Twin magic” can also refer to, in my mind at least, the inexplicable mental link twins seem to have on an almost telepathic level. Twins can sometimes relate to each other in a supernaturally close, metaphysical kind of way that strains our understanding of the basic ways two human minds can communicate with one another. Their connection is, in a word, “magic”.

The recent indie drama The Skeleton Twins opens with an example of “twin magic”much more bleak than any you’re likely to see between pro wrestling’s The Bella Twins. The film opens with estranged twins (played by SNL vets Bill Hader &  Kristen Wiig) both preparing to commit suicide in bathtubs on opposite ends of the country. Spooky. Hader’s attempt is the more “successful” of the two & the shock of the news of her brother’s anguished state brings Wiig to stage a reconciliation after a decade apart. This is about as dark of a place as a movie can start off and, indeed, The Skeleton Twins is sadistically committed to piling on even more tragedy from there. A fuzzy childhood memory of a parent’s death, a past controversy involving a teacher’s sexual exploits with an underage student, and a current struggle with substance & sexual addiction all weigh heavily on the film’s grim proceedings. Another bit of “magic” at work here, however, is how the film’s talented cast & understated writing keep this tragedy from feeling soul-crushingly dour. It’s a sad film, for sure, but it also can be soulfully uplifting & deliriously funny in spurts.

Hader & Wiig have incredible chemistry from their SNL days that sells the The Skeleton Twins‘s central sibling bond much more comfortably & believably than would even be necessary for the movie to work. Wiig has delivered so many of these depressive, self-hating performances in past projects like Welcome to Me & The Diary of a Teenage Girl that at this point her dramatic chops are even more finely tuned than her comedic ones. Hader is more of the newcomer in the soul-crushing cinema game & it’s genuinely fascinating to watch him embody what his character calls “another tragic gay cliche” in a way that feels realistic enough to be genuine. Hader’s twin is more of a tightrope in terms of characterization, since his effete homosexual mannerisms could easily devolve into caricature, but the actor pulls it off in a wholly convincing, endearing way (despite his theater kid theatricality & gothy acerbic sarcasm). Oddly enough, it’s Luke Wilson who steals the show on the comedic front, playing a naive “Labrador retriever” of a dopey husband. Wilson is so on point in this role that he can make the simple act of eating a frozen waffle & talking about his shoes a total knee-slapper of a character beat. Hader & Wiig are more in charge of the film’s lowkey line of pitch black dramedy and it’s their intimate exchanges of sour worldviews & mental anguish that make the film sing in its own quiet, understated way.

I was just complaining that the recent indie drama Adult Beginners failed to coalesce its interesting ideas & talented cast into a cohesive product above anything beyond basic mediocrity. The Skeleton Twins is a perfect example of how the same approach of small stakes understatement & depressive humor can work when it’s handled a little more confidently. The film’s Halloween costume motif is a great example of how a metaphor can be developed with very simple gestures (in this case linking current familial tragedies to ones buried in the past) instead of the way Adult Beginners briefly addresses its central swimming lessons metaphor without any clear intent for its meaning. Both films are, perhaps, exercises in small ambition indie drama, but The Skeleton Twins makes the formula work in an engaging, even devastating way. I don’t know if it’s a case of better writing or the “twin magic” performances of Hader & Wiig that make the difference, but The Skeleton Twins is a shining (and depressing) example of the lowkey indie dramedy done exactly right.