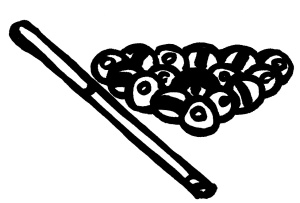 Cage stars opposite Selma Blair as middle-aged parents struggling to find fulfillment within a traditionalist family unit. Light banter barely disguises parents’ & kids’ seething hatred for each other as they lie, cheat, steal, and insult their bonds into tatters. This tension transforms into externalized violence when an unexplained supernatural event compels all parents of children everywhere to murder their own offspring in an epidemic of blind rage. Some of the widespread fallout of this event is captured in flashes of news coverage and in sequences of blood-splattered mayhem as parents swarm like zombie hoards to pick up their kids from schools & hospital nurseries. Mostly, though, the violence is contained to the suburban housing development where Cage & Blair’s rabid parents live. They chase their children around their home with various domestic objects, hellbent on murdering the ungrateful little brats while still doling out weaponized barbs of parental advice & commands. Meanwhile, memories & daydreams yank the audience outside the chaos of the moment to consider how the self-loathing midlife crises that preceded this bloodbath aren’t actually all that different from the violence itself. These relationships were never healthy, even when they were covered up with a smile instead of the buzz of an electric-powered jigsaw. This is an inversion of the dark humor we’re used to seeing in pictures like Cooties & The Children, where the kids are the otherworldly creatures to be feared. Here, parents are made to fear themselves, especially in regard to their unexamined jealousies & resentments toward their own offspring, who still have their glory years ahead of them instead of bitterly fading in the rearview on the road to selfless familial sacrifice.

Judging by the general negative reaction to last year’s similarly cartoonish home invasion horror comedy The Babysitter, I suspect many audiences will be frustrated by the frantic tone & editing rhythms of Mom and Dad. This is, paradoxically, a hyperactive movie with zero narrative momentum. Individual moments may indulge in the sugary energy of a breakfast cereal commercial and the whole thing is scored with a barrage of playful pop music, but its commitment to tangential asides & abrasive flashbacks often keeps its story static. Fully enjoying Mom and Dad, then, requires a forgiving appreciation of its pitch-black comedic nastiness, a wicked sense of humor where every parent is an untrustworthy monster and no child, neither newborn nor middle-aged, is safe from the malicious creatures who spawned them. I do think the movie plays it a little safe when it comes to explicitly depicting that child-endangering violence onscreen, especially in comparison to the recent cheap-o monster movie Clown. What it lacks in shock value brutality, however, it makes up for in a gruesome tone & worldview. The movie hides behind tongue-in-cheek touches like a 70s exploitation-themed credits sequence & stylized dialogue like “My mom is a penis,” but just under its ironic camp surface rots a charred, bitterly angry heart, one with no respect for the almighty Family Values that mainstream America holds so dear. To be honest, it’s a dynamic I find much more honest & relatable than the Family Above Everything messaging offered in feel-good-films like Coco. Even if you’ve never had a family member chase you down the hallway with a meat-tenderizer, Mom and Dad’s violent, deep-seated resentment is sure to resonate with you on some level (especially if you’re a middle-aged parent with ungrateful teens at home).

Show up for Nic Cage destroying a pool table with a sledgehammer while singing “The Hokey Pokey;” stay for the pitch-black humor about “successful” adults who find their manicured, suburban lives with the right career & the right family bitterly unfulfilling. Nic Cage is literally barking mad in this picture and is destined to steal much of its spotlight, but Selma Blair & Crank director Brian Taylor match his energy admirably at every step. This is a deranged collaboration among that unholy trinity and no family bond, no matter how sacred, is safe in its satirical war path. Mom and Dad may occasionally stumble in terms of pacing or tone, but you have to respect this kind of gleefully taboo social anarchy, especially coming from a comedy.