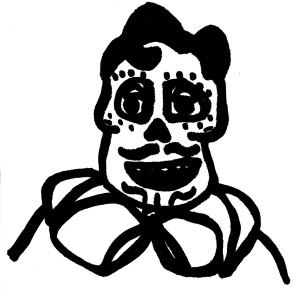 Whenever reviewing modern CG-animated kids’ movies, I try to make a point of announcing up front that they’re never really my thing, Pixar properties included. I admit this as a way of softening, if not invalidating my opinion on the topic at hand (right before I say something unpopular). For instance, I didn’t even have the energy to properly review Moana, a movie seemingly everyone loves but I had no business watching, so I just wrote an article detailing the few isolated things I appreciated about it instead. My status as a Pixar heretic should probably exclude me from reviewing the Día de los Muertos adventure epic Coco as well, but I was attracted to the film by its visual allure and overwhelming critical praise anyway. Oddly, my general disappointment with Coco wasn’t tied to its surface level Pixar-ness, though. I was impressed with the film as a vibrantly colorful visual piece, something I don’t typically experience with CG animation. It was also refreshing to see Pixar move past its usual “What if toys/cars/feelings/dinosaurs could talk?” creative rut to walk kids through Mexican cultural immersion and healthy attitudes about the inevitability of death. What bothered me about the film was more to do with how it functions as a message piece, a morality tale with a concrete lesson for kids to learn: that loyalty to your family is more important than your own mental or emotional health. Fuck that.

Miguel is a young Mexican boy who dreams of one day becoming a musician, despite his family’s ancestral ban on all music in his household. Over the course of the film, Miguel goes on a transdimensional journey to the ghost-populated Land of the Dead, thanks to the bridge between worlds offered by annual Día de los Muertos rituals, to learn that his “selfish” dream of pursuing art is destructive to the values of community & tradition that guide his life. This “Nothing is more important that Family” life lesson is softened when his elders & ancestors eventually buckle to accept how much music means to him, but that change of heart only occurs once they personally see value in the art themselves. If you apply that same dynamic to something that doesn’t universally affect people the way music does (for instance, if Miguel had discovered a sexual orientation or gender identity they didn’t approve of), the message is much more clearly toxic. “The only family in Mexico who doesn’t love music” is cruelly dismissive, even outright abusive to Miguel, driving him to hide his passion in cramped attic spaces & smashing his only guitar in front of him before he even gets to fully explain himself. Teaching kids to feel obligated to put up with that kind of abuse merely because of biological bonds just in case your bullies might one day changer their minds is a grotesque life lesson. There’s nothing wrong with the message that community & family are more important than the individual self, especially since in this case the lesson is embedded in the culture depicted, but you should also leave it open for kids to know that their community is optional and cruelty isn’t okay just because you’re related to your abusers.

My unwillingness to forgive Miguel’s elders & long-dead ancestors aside, I did appreciate the way his adventures in The Land of the Dead offered a colorful, but also horrific version of a modern kids’ movie. Most of the jokes landed flat with me and I wish the film were screened in Spanish instead of English, but I still appreciated its family-friendly, culturally-specific immersion in a world of friendly ghosts & skeletons. You can find that same kind of kid-friendly adventure epic that healthily explores the topic of death & memory in Kubo & the Two Strings, though, with the bonus of also exploring how families can be complicated & even destructive instead of drawing a hard line that says you should always bend to their will. I’d be a liar if I said individual family-dynamic moments didn’t pull my heartstrings by the film’s ending, but I was still largely negative on Coco as an overall messaging piece. As soon as Miguel’s first guitar was smashed in front of his crying face, he should have boarded on a bus out of town to find a new, less cruel community elsewhere. The clear dichotomy the movie establishes between either a) the virtue of staying with your family no matter how shitty they are to you or b) “selfishly” branching out on your own to find a more hospitable environment sat with me in the wrong way. It was a thematic hurdle that all the pretty colors, goofy skeletons, and super cute canine sidekicks in the world couldn’t help me clear.