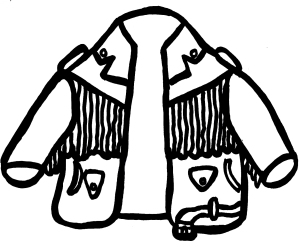 1. Deerskin – Quentin Dupieux’s film about a man’s obsession with a used (yet very expensive) fringed deerskin jacket. It keeps its dark humor evenly distributed throughout its runtime, but don’t assume that this is not a horror movie because it most definitely is. There’s enough spine-chilling moments that will weigh heavy on your mind long after the movie is over. It’s obviously right up my alley.

2. Swallow – This is a fun thriller about an unhappy housewife who finds great joy in challenging herself to swallow all sorts of foreign objects (marbles, tacks, etc.). Once she poops them out, she cleans them up and starts a small collection of her accomplishments. Don’t be surprised if you find yourself cheering her on as her collection grows.

3. The Painter and the Thief – In a horrible year that truly exposed the horrors of humanity, it was nice to watch a documentary about compassion and forgiveness. The story of a painter who had two of her paintings stolen by a criminal who then becomes her muse and friend is told in a very interesting yet very straightforward way. It’s definitely some good medicine for the disease of 2020.

4. Bacurau – A wonderful Brazilian film that’s a little bit sci-fi, a little bit western, and a little bit horror. As the fictional town of Bacurau is slowly being wiped off the map, wealthy white elites are hunting the townsfolk for sport. The film builds to a very intense blood bath that was shocking and memorable to say the least.

5. The Other Lamb – This is perhaps the year’s best coming of age film. It just so happens to take place in a religious cult in the woods that’s filled with incest and misogyny. Also, I can’t go without mentioning how hauntingly beautiful its scenery is.

6. You Cannot Kill David Arquette – The Swampflix crew did an entire podcast episode about this documentary of David Arquette’s return to the world of professional wrestling, and I was absolutely blown away by it. Not only did it spark my interest in wrestling, but it also got me interested in the life of David Arquette after years of just knowing him as Courtney Cox’s ex-husband who played a few goofy film roles.

7. Blow the Man Down – I love films that take place in New England fishing towns, and I also love crime thrillers. Blow the Man Down is a perfect mix of both. The cherry on top is that the town full of dark secrets is quietly run by a group of sweet old ladies.

8. Come to Daddy – Elijah Wood has been playing very interesting and strange roles in recent years, and he absolutely kills it in Come to Daddy. It’s constantly shocking from beginning to end. There aren’t many films that came out this year that were as entertaining as this one.

9. Relic – This Australian emotional horror film about the horrors of dementia is in the same wheelhouse as Hereditary. Personally, I found it to be more sad than spooky, but that didn’t take away from it being a legitimate horror film.

10. The Berlin Bride – An almost silent film about two quirky guys who are taken over by a mannequin. It’s very dreamlike and bizarre, and for some reason I felt like a total pervert when I was watching it.

11. Bad Hair – A horror comedy about a killer weave. It’s a funny satire that stars one of my all-time favorite actresses: Vanessa Williams!

12. Color Out of Space – The best body horror film of 2020! And as a bonus, it stars Nicolas Cage so you get all of that Cage-ian spice in an already insane movie.

13. The Invisible Man – I honestly didn’t think that I was going to enjoy this as much as I did. This is everything that a good thriller should be with some sci-fi elements thrown in as a bonus.

14. Birds of Prey – If you haven’t watched this yet, do yourself a favor and run to it. I made the mistake of associating it with Suicide Squad and run-of-the-mill superhero movies, so I didn’t watch it until very late in the year. It’s a blast!

15. The Rental – Actor Dave Franco’s directorial debut explores that fear we all get when taking those first steps into an AirBnb. It’s a solid thriller with an awesome cast.

16. Capone – This movie is a shit show, but Tom Hardy shows up and shows out in a very Nicolas Cage way. His over-the-top performance of an aged Al Capone is not to be missed.

17. Host – I spent most of 2020 stuck on Zoom (mostly for work), and this fabulous Zoom horror movie came out when we needed it the most. This movie is COVID-19 AF.

18. Arkansas – Funnyman Clark Duke made his directorial debut this year with this crime thriller, and it was surprisingly solid. Duke stars in the film alongside Liam Hemsworth. Both actors had really good chemistry in the film and made for a really fun duo.

19. His House – A refugee couple flees Sudan and end up in the UK. They deal with the horror of being refugees in a new country that doesn’t treat them humanely while also dealing with a more literal horror that follows them from Sudan. It’s very heartbreaking and super scary all at the same time.

20. Rent-A-Pal – This is a silly VHS based horror movie about a lonely guy taking care of his elderly mother while desperately seeking out a girlfriend through a dating VHS program. When he happens upon a Rent-A-Pal VHS that stars a really creepy Wil Wheaton, the VHS tape takes over his life (similar to the deerskin jacket in my top 2020 film, Deerskin) and turns him into a monster. I’m glad I was able to watch this one before the year was over.